Joel 2:25
“I will repay you for the years the locusts have eaten—the great locust and the young locust, the other locusts and the locust swarm—my great army that I sent among you.”

Explanation and Commentary on Joel 2:25

Throughout redemptive history, one sad theme runs consistently. God sets his favor on the Israelites as his treasured possession, makes a covenant with them to bless them, and they break their part of the covenant. It is a sad illustration of the human condition that God’s own people, rescued from bondage in Egypt by the mighty hand of God, forget again and again his faithfulness and goodness to them, turning instead to false gods and the wickedness that goes with other religions.

God is perfectly holy, and while he routinely shows his children mercy and is patient with them, his holiness eventually leads to the necessity of disciplining his people. Whenever he does, he always returns to restore them and bless them once again because of his lovingkindness and mercy for them. In Joel 2:25, God promises not only to resume blessing, providing for, and protecting his chosen ones who have failed, he even promises to restore what was lost in the destruction brought upon them by their sin and rebellion.

This is a sweet promise for anyone who has suffered the consequences of their sin and fears that they cannot recover what was lost. God is a kind and merciful Father to us who will not discipline us more than is necessary and longs to restore us in our relationship to him, and in the blessings we enjoyed by his hand.

Breaking Down the Key Parts of Joel 2:25

#1 “I will repay you…”
If God promises to repay, you need no collateral. If only we would believe the promises of God and live accordingly. This promise is meant as an encouragement for a chastened people. When the Father disciplines his children, he stays his hand at just the right moment. And here, he promises not only that the discipline will come to an end, but that restoration is his intent.

#2 “…for the years the locusts have eaten—the great locust and the young locust, the other locusts and the locust swarm…”
In the time the Israelites were living out their dispersion for their rebellion towards God, they and their lands were being laid waste, as though locusts of various kinds and swarms were having their way on the livelihood of God’s children. God seems to be promising that the blessing that will follow will be proportional to the discipline received. This is an amazing kindness because their punishment had not been strong enough even to fit the great crime of their rebellion. God is merciful. He is also generous.

#3 “…my great army that I sent among you.”
There is no army that God does not have sovereign control over. God promised to unleash an army upon Babylon for their part in the affliction of his people.

Jeremiah 51:20
“You are my war club, my weapon for battle—with you I shatter nations, with you I destroy kingdoms.”

NIV
“I will repay you for the years the locusts have eaten— the great locust and the young locust, the other locusts and the locust swarm— my great army that I sent among you.”

ESV
“I will restore to you the years that the swarming locust has eaten, the hopper, the destroyer, and the cutter, my great army, which I sent among you.”

KJV
“And I will restore to you the years that the locust hath eaten, the cankerworm, and the caterpiller, and the palmerworm, my great army which I sent among you.”

NKJV
“So I will restore to you the years that the swarming locust has eaten, The crawling locust, The consuming locust, And the chewing locust, My great army which I sent among you.” 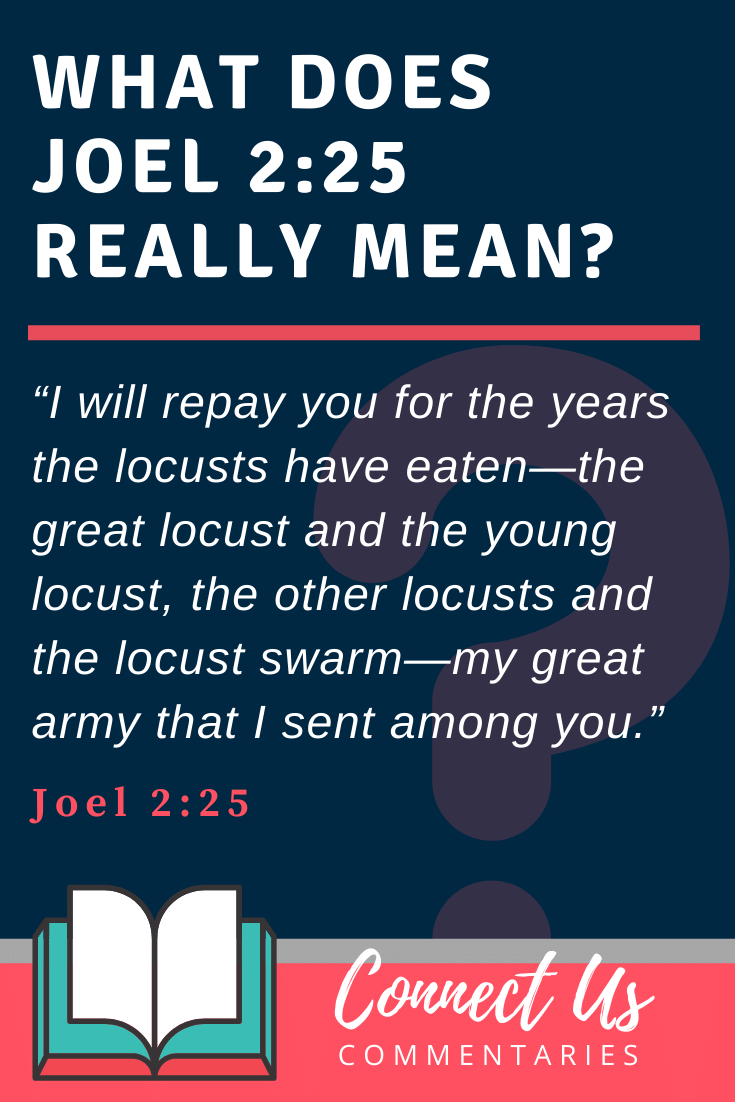