John 1:16
“Out of his fullness we have all received grace in place of grace already given.”

Explanation and Commentary of John 1:16

Jesus Christ came into the world as “the only Son of the Father” to make him known to us in ways that were not yet fully known (Jn 1:18). John 1:17 says that “the law was given through Moses.” The law of Moses was amazing grace to the Israelites. But compared to the “grace and truth” that was revealed in Jesus Christ, the law could be called the “ministry of death” (2 Cor 3:7). By the Light of the World, Jesus Christ, we have received a grace that takes the place of the grace already given. This does not truly replace the grace of God revealed in the Old Testament; rather, it further reveals the grace that was from the beginning. God never changes, and Jesus, his only Son, reveals him fully.

God’s mercies are new every day. His grace to us is stacked upon his grace from yesterday. Before we can comprehend the good gift of his grace today, he will pile on more grace and mercy tomorrow. His fullness is the source of his never-ending supply of grace and love.

Breaking Down the Key Parts of John 1:16

#1 “Out of his fullness…”
Whatever we have from Christ, it comes from his fullness in his Father. John 1:14 says he is “full of grace and truth.” All the grace and truth given to us comes from Jesus Christ. He is the infinite source of grace and the infinite source of truth. He is the Word of God made flesh and revealed the Father to the world. He is the Light that illuminates the darkness and drives it away. Whatever you could need from Christ, he is able to supply.

#2 “…we have all received grace”
There is no atheist that has ever lived apart from the blessing and grace of God who created him and provided good for him. Matthew 5:45 says, “He causes his sun to rise on the evil and the good, and sends rain on the righteous and the unrighteous.” All have received the grace of life. All have benefited from the good this world provides. Jesus Christ died for the sins of all who believe in his name.

#3 “…in place of grace already given.”
On top of all of the blessings that the good Creator has provided to everyone by his common grace, God blessed the world by calling Abraham to be a vicarious man for his special blessing and grace, so that in the fullness of time, all nations would be blessed to enter into the Kingdom of God. And then, he sent his one and only Son, Jesus Christ, to fulfill his promises to Abraham to bless and save all who would believe. On top of salvation, God continues to bless us every day with new mercies out of the riches of his glory (Eph 3:16).

NIV
Out of his fullness we have all received grace in place of grace already given.

NLT
From his abundance we have all received one gracious blessing after another.

ESV
For from his fullness we have all received, grace upon grace.

KJV
And of his fulness have all we received, and grace for grace.

NKJV
And of His fullness we have all received, and grace for grace. 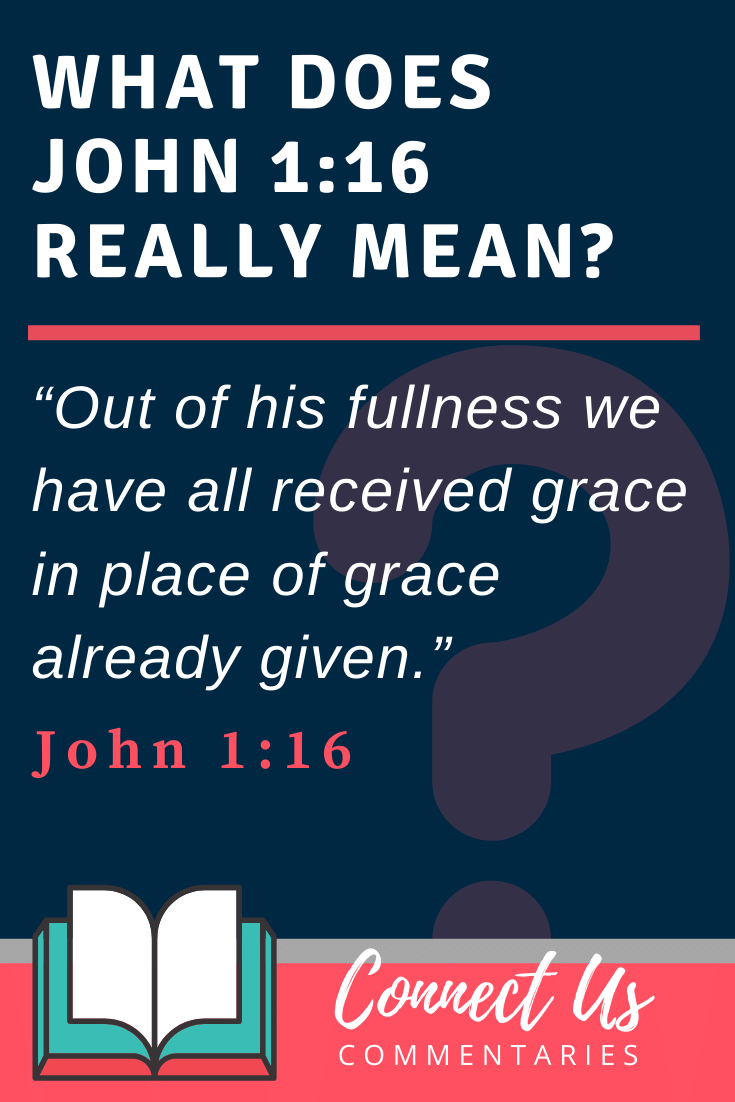