Explanation and Commentary of John 10:34

Jesus has been explicitly calling himself the Messiah, the Son of God, and one with the Father (Jn 10:25-33), and the Jews are preparing to stone him for blasphemy, accusing him of claiming to be God. This should refute any who say that Jesus never claimed to be God. He did so definitively.

In his defense he quotes Psalm 82:6. In this Psalm God is most likely addressing human rulers whom he has endowed with authority (Ro 13) to render just judgements and govern in his name. The human rulers failed to do so in a way that honored God and Psalm 82 is his judgment on them. Jesus uses the verse to make a connection. If human rulers not begotten by the Holy Spirit are called “gods” by the Father in that Psalm, then Jesus has every right to call himself the “Son of God,” considering his claim to the title is greater than the human authorities.

There is simply no way to read Scripture and go away saying “Jesus didn’t claim to be God.” He most certainly did, and he most certainly was God. “In the beginning was the Word, and the Word was with God, and the Word was God. He was with God in the beginning” (Jn 1:1-2). He is mighty and able to save and accomplish what he says he will accomplish.

Breaking Down the Key Parts of John 10:34

#1 “Jesus answered them,”
Jesus was challenged constantly by the teachers of the law, who again and again, dismissed him as an uneducated carpenter. But Jesus knew the Scriptures from boyhood, and possessed God’s power to interpret them. How much more so should we his people study the Scriptures as we cultivate our relationship with him. It is not the mere head knowledge of a scribe that we seek, but the knowledge, interpreted by the Spirit and the mind of Christ, so that, like Jesus, we can teach as those who “have authority” (Mt. 7:29).

#2 “Is it not written in your Law,”
Jesus affirms all Scripture to be the Word of God, true, and useful: “Scripture cannot be set aside” (verse 35). Jesus masterfully dealt with the teachers of the law when they came to accuse him. Using their own law, of which they were the so-called experts, he defeated their arguments every time, and they often had to crawl away to make a new plan. Because they were not truly of God (Jn 8), no amount of Bible knowledge was enough to save them. The true test of faith for the Jews was to be able to see the Father when they saw Jesus.

#3 “I said, you are gods?”
Since the sixth day of creation (Gen 1:26) God’s eternal purpose for man has been revealed. God gave Adam a portion of his Spirit and delegated a great amount of authority to his image-bearer for the sake of ruling on the earth. Hundreds of cultures who knew nothing of the Hebrew God, Yahweh, have understood the endowment of supernatural power for their “divinely appointed” kings and other rulers. Some cultures, like the Egyptians and Romans even ascribed deity to their rulers. We must see ourselves as humans rightly as delegated rulers of the earth for God’s purposes and glory. And, to Jesus’ point, we must follow and worship him as the King of Kings and Lord of Lords, the one and only Son of God, forever and ever.

NIV
Jesus answered them, “Is it not written in your Law, ‘I have said you are “gods”’?

NLT
Jesus replied, “It is written in your own Scriptures that God said to certain leaders of the people, ‘I say, you are gods!’

ESV
Jesus answered them, “Is it not written in your Law, ‘I said, you are gods’?

KJV
Jesus answered them, Is it not written in your law, I said, Ye are gods?

NKJV
Jesus answered them, “Is it not written in your law, ‘I said, “You are gods” ’? 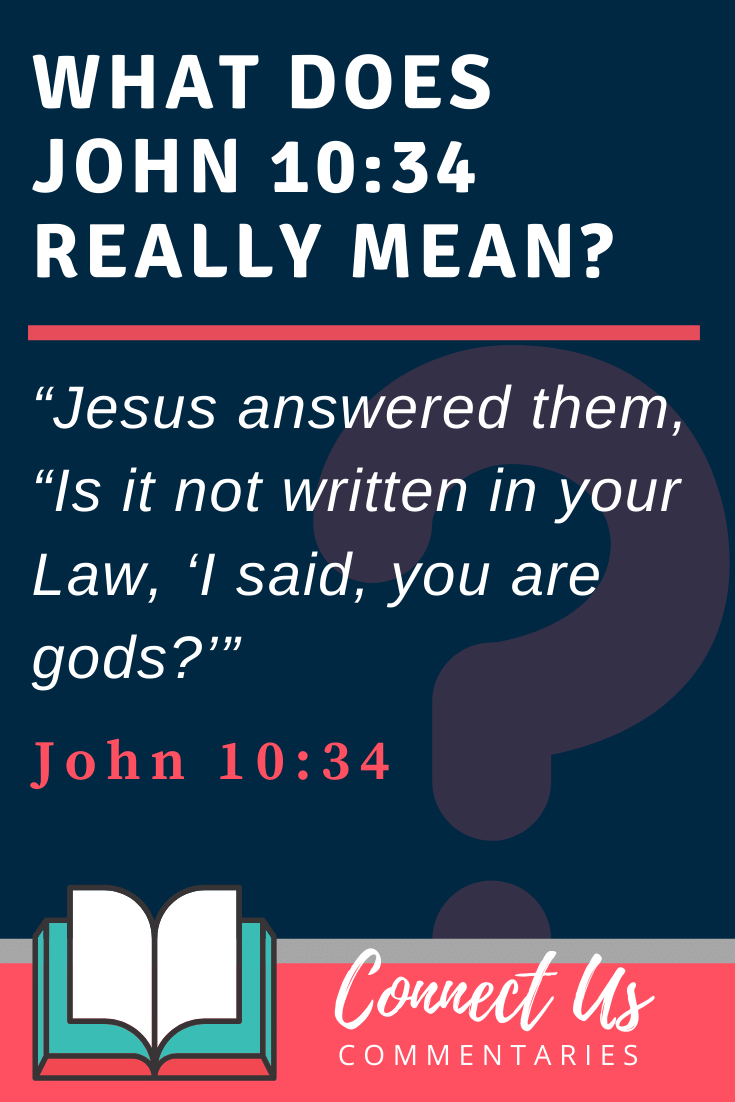