John 3:13
“No one has ever gone into heaven except the one who came from heaven—the Son of Man.”

Explanation and Commentary of John 3:13

This verse falls within the great discourse to Nicodemus about being reborn and about the Son’s role in dying for the sins of the world. It is difficult to discern Jesus’ exact meaning here, but it is clear that he is speaking of himself. Christ often referred to himself as the Son of Man, as well as the Son of God. Though others had gone into heaven in a certain way, e.g. Enoch (Gen 5:24), no one had been a part of the council of God in heaven and also came down from heaven to man. No one had gone from being a heavenly being, such as God the Son is and was, to being born in human form. Christ was fully God and fully man by nature of his birth to a virgin by the Holy Spirit. This is a great mystery, but at the very least we should read the intention in this that Christ had of establishing his authoritative knowledge of eternal reality.

It should also be understood that not only had Jesus come down from heaven to earth to save mankind from their sins, he also has ascended back into heaven once more where he sits at the right hand of the Father to intercede on behalf of his people. When you pray in Christ you pray with him next to God, boldly and with the ear he has reserved for his beloved Son.

Breaking Down the Key Parts of John 3:13

#1 “No one has ever gone into heaven…”
This could mean that until Jesus died on the cross, souls went somewhere other than heaven to await Christ’s death and resurrection, but it’s not likely. It seems more plausible that Enoch, Elijah, Abraham, and others did go to heaven. Jesus most likely in this context means that no one that has gone into God’s council has come down to teach.

#2 “…except the one who came from heaven—”
Jesus is definitely speaking of himself in support of the divine origin of his teaching.

#3 “the Son of Man.”
Calling himself Son of Man, even more than Son of God seems to have been Jesus’ way of highlighting his humanity along with his divinity. That he is fully God and fully man is crucial to the efficacy of his sacrifice on the cross. He had to be fully God to be sinless and to die a death that was for everyone who would believe, and he had to be fully man in order to reverse the curse of the first man Adam.

NIV
“No one has ever gone into heaven except the one who came from heaven—the Son of Man.”

NLT
“No one has ever gone to heaven and returned. But the Son of Man has come down from heaven.”

ESV
“No one has ascended into heaven except he who descended from heaven, the Son of Man.”

KJV
“And no man hath ascended up to heaven, but he that came down from heaven, even the Son of man which is in heaven.”

NKJV
“No one has ascended to heaven but He who came down from heaven, that is, the Son of Man who is in heaven.” 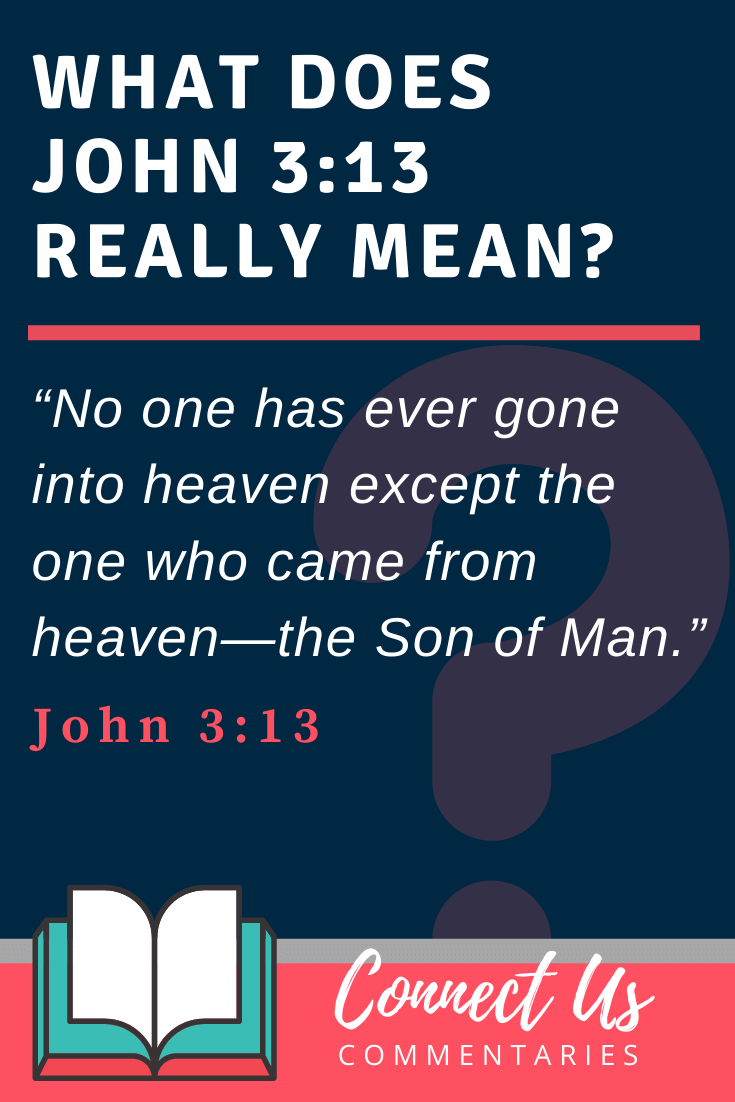