John 3:17
“For God did not send his Son into the world to condemn the world, but to save the world through him.”

Explanation and Commentary of John 3:17

Coming on the tails of the most memorized Bible verse in the Western world (Jn 3:16), this verse tells us something important about the way Christ viewed his own mission. He was not here to condemn the world. One obvious reason is that the world is already condemned (Jn 3:36). Just like in the days of Noah, there is sure destruction for sin and sinfulness from a holy and righteous God, whose character does not allow for any other position towards injustice, perversion, and rebelliousness which so permeates the world in its fallen state. And just like the mercy of God for his elect, Noah and his family, God has set aside the Church to be objects of mercy. Just like he instructed Noah to build an ark, he has sent his one and only Son to save those who would believe. Not to push the metaphor too far; just like Noah and his family had to choose to get on the boat, those who would be saved must put their faith in Jesus to save them from the “wrath to come” (1 Thes 1:10).

This is more merciful than most people ever grasp because in our sinful nature, we just cannot accept that what we are doing is wrong and offensive to the Creator for objective moral reasons. Even regenerate Christians are not able to grasp it because we still are so influenced by our flesh, but to grasp it is truly a key to joy, thankfulness, and a perspective that will drive us to follow the God who has saved us. Praise him for his grace and mercy towards us, and trade all you possess to buy the field with the treasure (Mt 13:44). He’s more worth more than we are capable of knowing.

Breaking Down the Key Parts of John 3:17

#1 “For…”
The verse comes as a result of the previous, which says, “For God so loved the world that he gave his one and only Son, that whoever believes in him shall not perish but have eternal life” (Jn 3:16). That one came as a result of what preceded it, a conversation with Nicodemus about regeneration before one can see the kingdom of God, and about the fact that the Son of Man must be lifted up and believed on.

#2 “God did not send his Son into the world to condemn the world,”
Jesus Christ was indeed sent by his Father in heaven, but it was not for the purpose of condemning the world. While all the Old Testament prophets probably hoped to draw sinners back to God, most of their ministries served as ministries of condemnation, as an aspect of the accountability for God’s people who will not be able to claim they had not been warned (Ez 2:7).

#4 “…through him.”
Jesus would not only preach the message of the gospel of the kingdom but would be the message. Only through his death on the cross for us could the wrath of God for sin be satisfied. Consequently, anyone who believes in him will not perish but have everlasting life.

NIV
“For God did not send his Son into the world to condemn the world, but to save the world through him.”

NLT
“God sent his Son into the world not to judge the world, but to save the world through him.”

ESV
“For God did not send his Son into the world to condemn the world, but in order that the world might be saved through him.”

KJV
“For God sent not his Son into the world to condemn the world; but that the world through him might be saved.”

NKJV
“For God did not send His Son into the world to condemn the world, but that the world through Him might be saved.” 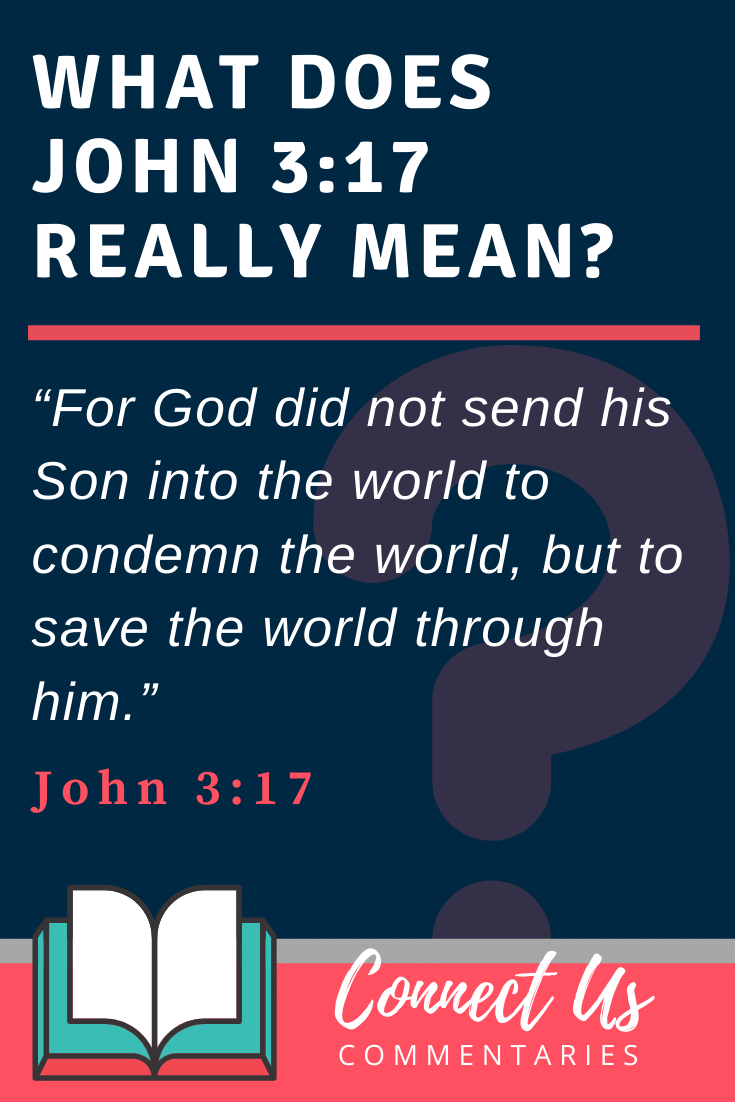