John 4:18
“The fact is, you have had five husbands, and the man you now have is not your husband. What you have just said is quite true.”

Explanation and Commentary of John 4:18

In John 4, Jesus sat down at a well to rest, but also because he had a divine appointment with a woman of Samaria. Jesus’ preaching and teaching ministry were almost always punctuated by a demonstration of the kingdom of God by some miracle. He sometimes healed the sick. Other times he cast out demons, and still others, he even raised the dead. In this particular case, Jesus uses an extremely accurate prophetic utterance to get this woman’s attention who replied, “Sir, I can see that you are a prophet” (Jn 4:19). What ensued was a conversation that led to her belief and proclamation to others that she had met the Messiah.

Interestingly, Jesus does not condemn the woman for her ways with men, though he is honest about it, but rather engages with her about the truth of God. More than that, observers marveled at the fact that Jesus was sharing so much truth and time with one who was not only a female but a Samaritan female of ill repute. The message Jesus sent by this action would be further fleshed out by Paul who said, “There is neither Jew nor Gentile, neither slave nor free, nor is there male and female, for you are all one in Christ Jesus” (Gal 3:28). While this doesn’t make men and women interchangeable in how they are made and for what roles, it does speak to the intrinsic value of women, minorities, and people who have fallen into sin. By the fact that God made them in his image, they are worthy to hear the Gospel and come into his family. Every person was created by God, fallen by sinfulness, and will be saved by grace if they believe in Jesus and his work on the cross (Jn 3:16).

Breaking Down the Key Parts of John 4:18

#1 “The fact is,”
Jesus never lied. He never evaded for his own sake. He was as straightforward as any who ever lived, having no fear of man and no desire for approval. He did not deal in opinions, feelings, or subjective conjecture. He dealt only in facts.

#2 “you have had five husbands, and the man you now have is not your husband.”
There is no reason to believe that Jesus had been given prior knowledge of these facts. The woman believed him to be prophetic.

#3 “What you have just said is quite true.”
Her exact words to him were, “I have no husband.” This was after Jesus said to her, “Go call your husband” (Jn 4:16). It is unclear whether Jesus knew this when he told her to go and call her husband, or if it was revealed to him directly afterward. Either way, it was prophetic and demonstrated his authority to the woman.

NIV
“The fact is, you have had five husbands, and the man you now have is not your husband. What you have just said is quite true.”

NLT
“For you have had five husbands, and you aren’t even married to the man you’re living with now. You certainly spoke the truth!”

ESV
“For you have had five husbands, and the one you now have is not your husband. What you have said is true.”

KJV
“For thou hast had five husbands; and he whom thou now hast is not thy husband: in that saidst thou truly.”

NKJV
“For you have had five husbands, and the one whom you now have is not your husband; in that you spoke truly.” 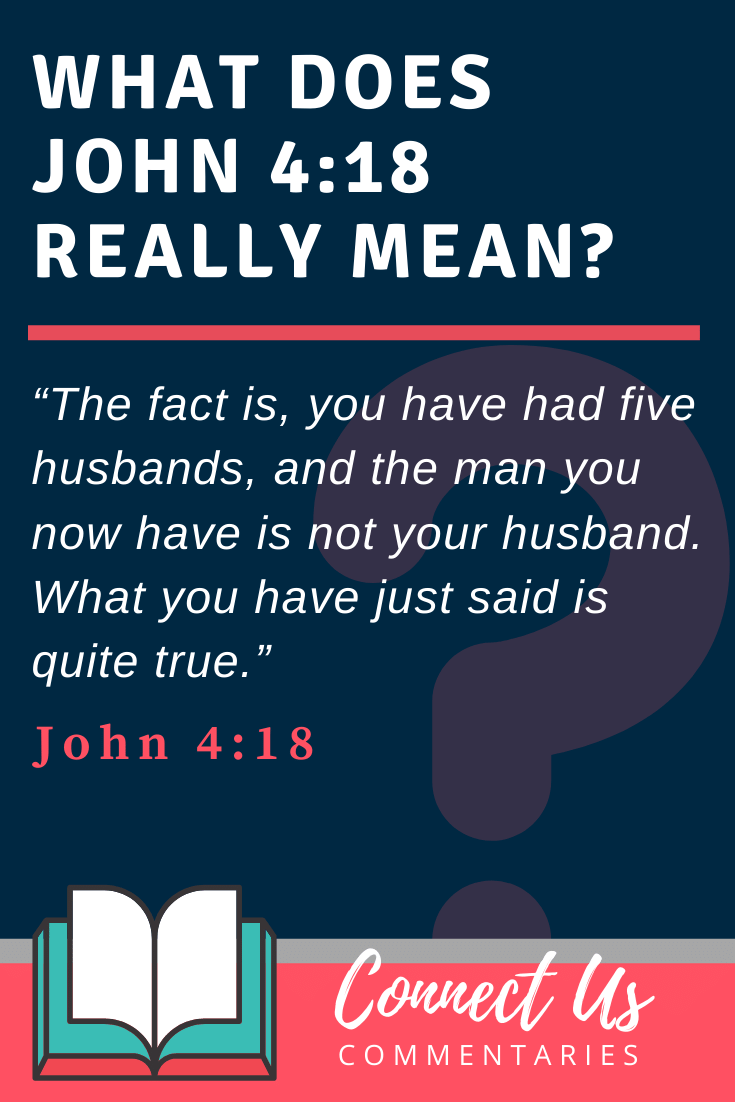