Leviticus 19:28
“Do not cut your bodies for the dead or put tattoo marks on yourselves. I am the Lord.”

Explanation and Commentary of Leviticus 19:28

Cutting and tattooing for the dead were religious-cultural norms in the pagan cultures under God’s judgment in the promised land. God’s warnings largely regarded practices of those cultures, because God knew that the Israelites would be tempted to appropriate the cultures which they were supposed to be replacing.

Cutting seems to have been the demonic practice of shedding one’s own blood in order to appease the gods of those cultures, particularly for the sake of fertility. Here it refers to cutting “for the dead.” This is done still today in Eastern cultures in the process of mourning the dead.

Besides the branding of slaves and property, tattooing seemed to almost always identify one with gods, goddesses, and cult practices. There are a few instances in Scripture where tattooing or engraving on the skin is seen in a positive light, but those may be purely symbolic references for identifying God’s people while they are in exile.

The Christian should take seriously the prohibition on cutting as it is simply self-harm and always associated with the demonic. We should also think twice before getting any kind of tattoo. While it may be a conscience issue, depending on the nature of the tattoo itself, this verse should carry at least some weight. Also, Christians should ask themselves if they are feeling a lack of identity and “specialness” before they go and do a potentially foolish thing that adds a permanent mark. They should consider what a much older version of themselves might want to say about it.

Breaking Down the Key Parts of Leviticus 19:28

#2 “…cut your bodies for the dead…”
Our bodies are created by God as his temple and we are not to disfigure it for any reason. The Jews were given circumcision, but there is no other instance where God required or even allowed his people to disfigure their bodies.

#3 “Or put tattoo marks on yourselves.”
Whether it is a permanent tattoo or a temporary one, the prohibition in this verse seems to be concerning primarily those tattoos that identify one with a pagan false god. Since this was the habit of some in the land of Canaan, God saw fit to warn his people, who were prone to wander into idolatry.

#4 “I am the Lord.”
God has made a statement and here grounds it in his declaration of himself. It is by his own authority that he commands his people. His reminder to them that he is the only God is further reason to believe that cutting and tattooing had a great deal to do with idol worship.

NIV
“Do not cut your bodies for the dead or put tattoo marks on yourselves. I am the Lord.”

NLT
“Do not cut your bodies for the dead, and do not mark your skin with tattoos. I am the Lord.”

ESV
“You shall not make any cuts on your body for the dead or tattoo yourselves: I am the Lord.”

KJV
“Ye shall not make any cuttings in your flesh for the dead, nor print any marks upon you: I am the Lord.”

NKJV
“You shall not make any cuttings in your flesh for the dead, nor tattoo any marks on you: I am the Lord.” 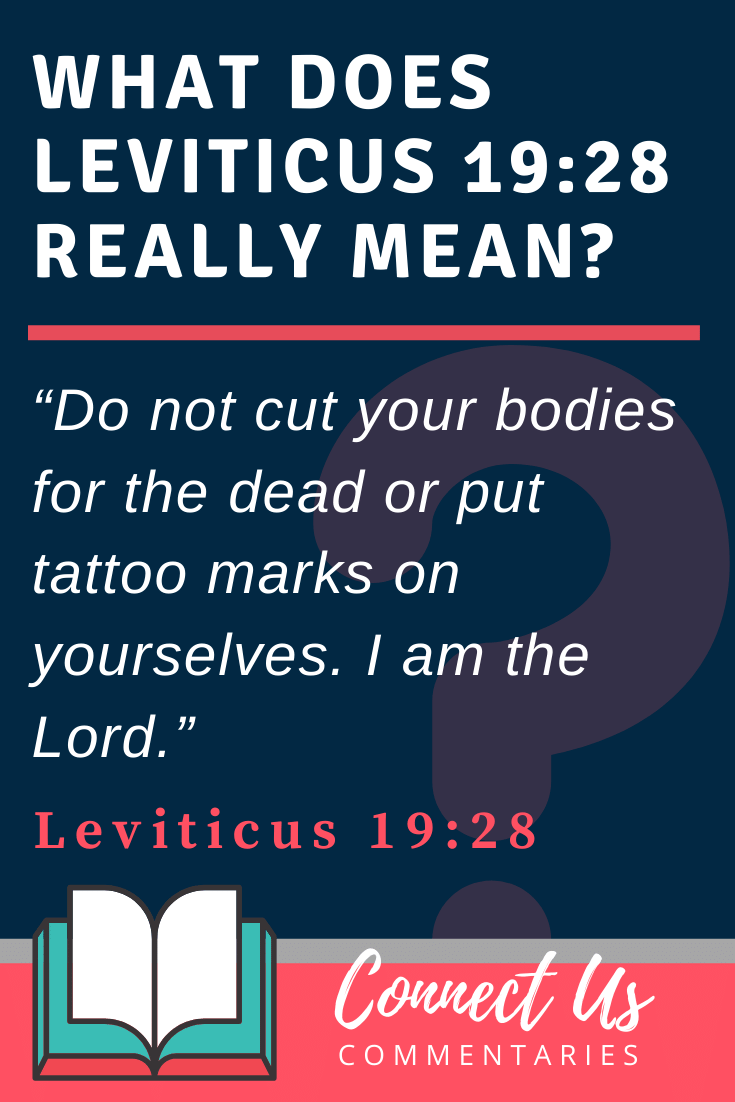