Luke 1:45
“Blessed is she who has believed that the Lord would fulfill his promises to her!”

Explanation a Commentary of Luke 1:45

The mother of Jesus, Mary, was told by the angel Gabriel that she was to have a child by the Holy Spirit who would be the Savior of the world, though she was a virgin and still betrothed to Joseph. Mary faithfully accepted the responsibility of bearing and raising the Son of God, saying, “I am the Lord’s servant…May your word to me be fulfilled” (Lk 1:38). Immediately Luke tells us that she traveled to her older cousin Elizabeth’s house, who was also pregnant with the one who would be the “voice of one calling in the wilderness” (Isa 40:3) who would announce the coming of the Lord and baptize Jesus in the River Jordan (Mt 3:13).

Amazingly, when Mary entered the home of her cousin, Elizabeth’s baby leaped in the womb while Elizabeth was filled with the Holy Spirit. She then prophesied encouragingly, “Blessed are you among women, and blessed is the child you will bear! But why am I so favored, that the mother of my Lord should come to me” (Lk 1:42-43)? A few sentences later she speaks the blessing of verse 45 to Mary.

That Mary believed the Lord’s promises to her is seen as a blessing. This is what separates people in the coming judgment. The sheep on Jesus’ right hand believe the Lord’s promises and live accordingly, the goats do not. The sheep serve God by serving others, the goats do not serve God because of their unbelief (Mt 25:31-46). Cultivate belief in the promises of God by reading the Word and acting on it daily and prayerfully.

Breaking Down the Key Parts of Luke 1:45

#1 “Blessed is she…”
Elizabeth was right to say that Mary was blessed. Mary would undergo hardship for the Lord, facing scandal and the threat of divorce, because she carried a child out of wedlock, having been betrothed, but not yet married. And yet, there is no greater blessing than to be granted to suffer for the name of Jesus (Mt 5:10-12), and Mary was the first to do so.

#2 “…who has believed…”
True Christianity is simple belief. Belief leads to a relationship with Jesus, which then leads to action. Any religious activity of service to God that does not start with true belief is dead works.

#3 “…that the Lord would fulfill his promises to her.”
Even the Christian who has not been visited by an angel from heaven can count on the promises of God made to him or her personally through the Word of God. There are a multitude in Scripture to hold to and be strengthened by. Blessed are any who believe God’s promises.

NIV
Blessed is she who has believed that the Lord would fulfill his promises to her!

NLT
You are blessed because you believed that the Lord would do what he said.

ESV
And blessed is she who believed that there would be a fulfillment of what was spoken to her from the Lord.

KJV
And blessed is she that believed: for there shall be a performance of those things which were told her from the Lord.

NKJV
Blessed is she who believed, for there will be a fulfillment of those things which were told her from the Lord. 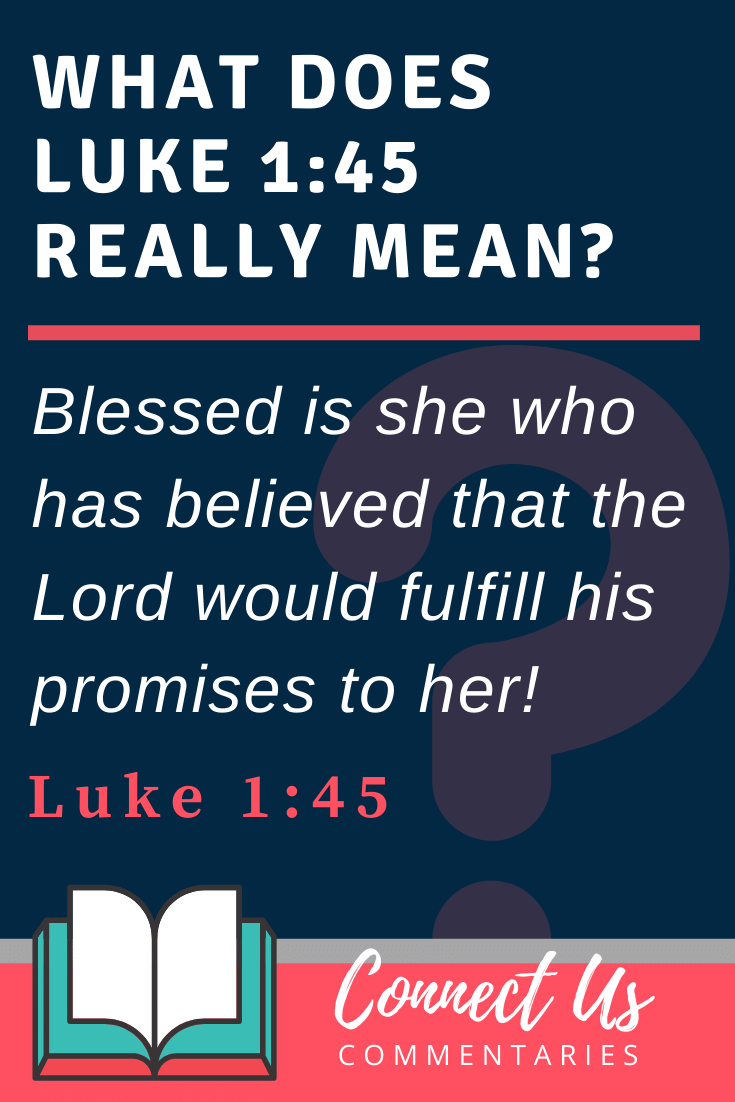