Luke 10:19
“I have given you authority to trample on snakes and scorpions and to overcome all the power of the enemy; nothing will harm you.”

Explanation and Commentary of Luke 10:19

Satan has a great measure of power on earth in this age that was essentially handed to him by Adam at the fall in Genesis 3. But Jesus came to defeat him and usher in a Kingdom that would advance forcefully into the dominion of darkness (Col 1:3).

The mightiest of demons, even satan himself, does not have as much power and authority as the weakest of believers who are filled with the Holy Spirit of God. The disciples returned from a ministry trip taken after being empowered by Jesus to cast out demons and heal the sick. They were excited about what they’d seen and Jesus encouraged them with the words of Luke 10:19.

It should also be remembered what Jesus’ next words were, that rather than rejoice because the demons submit to you, rejoice “that your names are written in heaven.”

Breaking Down the Key Parts of Luke 10:19

#1 “I have given you authority…”
After Jesus returned from the wilderness where he defeated satan in battle, he quickly gained a reputation for speaking and acting as “one with authority” (Lk 4:36). The centurion whose servant was healed by Jesus caused Jesus to marvel at his faith when he showed that he understood Jesus’ power to heal had to do with his authority over sickness (Mt 8:5-13). His authority caused demons to scream out when Jesus was present, and then obey his commands. It caused sickness to go away. He demonstrated authority over the weather, and matter (at the feeding of the 5000), and even death submitted to Jesus. Jesus gave authority to the disciples and, by his Holy Spirit, has given the same authority to his Church today.

#2 “…to trample on snakes and scorpions…”
All the evil in the world, including death, sickness, and demonic oppression is the work of Satan and demons, i.e. “snakes and scorpions.” They bluster and rage in order to terrify the people of the world and sow fear and doubt, but the truth is that the least in the Kingdom of God has authority to “trample on them.”

#3 “…and to overcome all the power of the enemy;”
Jesus left his Church to plunder satan’s kingdom until the return of Christ. If only the Church could grasp this fact, there would be great swaths territory taken from the evil one. But the power of satan in this age rests with his power to lie and deceive the world, even Christians into believing that his power is greater, and we are at his mercy. It is not true. We have the power of God because he has given it to us with his salvation and his Holy Spirit.

#4 “nothing will harm you.”
While we may face setbacks, the evil one has no real power to harm us. Ultimately, even if we are slain, we will rise again with Christ at the “last trumpet” (1 Cor 15:52). The worst that can happen on earth is that they may “kill the body” (Mt 10:28), but fearing God rightly will give you courage that, ultimately, “nothing will harm you.”

NIV
“I have given you authority to trample on snakes and scorpions and to overcome all the power of the enemy; nothing will harm you.”

NLT
“Look, I have given you authority over all the power of the enemy, and you can walk among snakes and scorpions and crush them. Nothing will injure you.”

ESV
“Behold, I have given you authority to tread on serpents and scorpions, and over all the power of the enemy, and nothing shall hurt you.”

KJV
“Behold, I give unto you power to tread on serpents and scorpions, and over all the power of the enemy: and nothing shall by any means hurt you.”

NKJV
“Behold, I give you the authority to trample on serpents and scorpions, and over all the power of the enemy, and nothing shall by any means hurt you.” 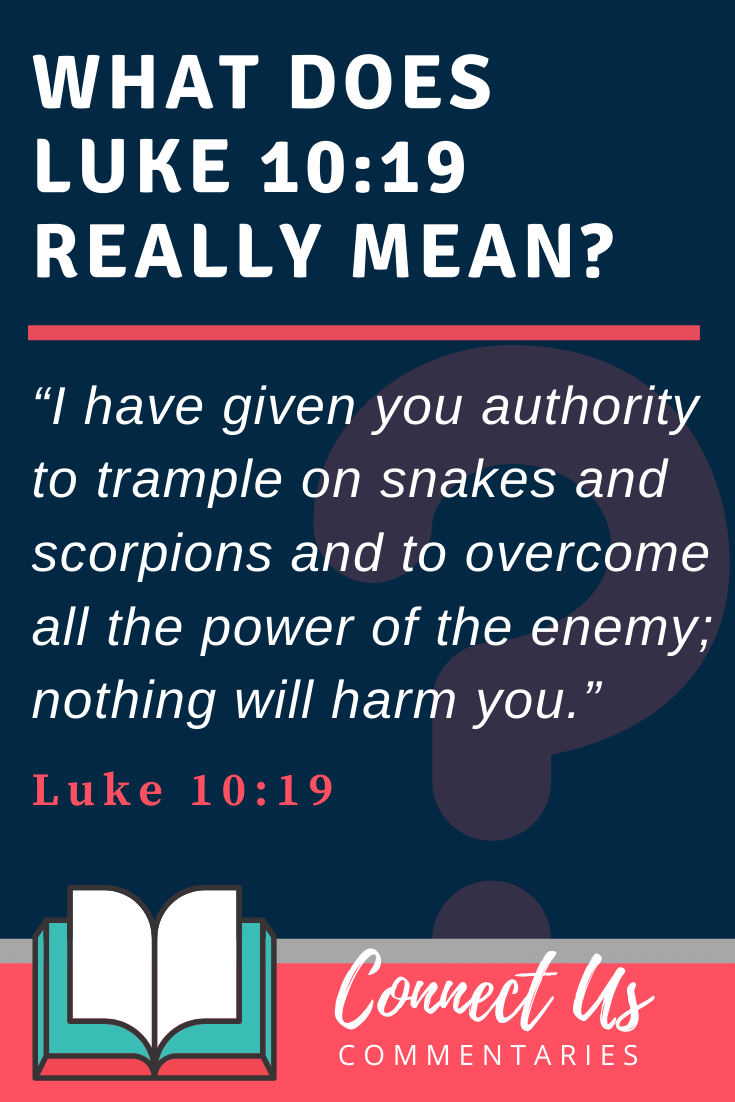