Explanation and Commentary on Luke 12:48

The principle of stewardship is a common theme in Scripture, whether it is concerning financial stewardship, or, as in this case, stewardship of knowledge and understanding.

This passage comes in a section on watchfulness and seems to be directed specifically to those whom Jesus has entrusted the carrying on of his work of feeding his sheep.  The more they understand and the more authority they have been given, the more they will be expected to do God’s will on behalf of his Church.

Jesus has been emphasizing that he could return any moment, and he expects to find his people living according to the principles of his Kingdom.  Any earthly goods they could trade for security in the Kingdom of God will produce eternal returns.

Breaking Down the Key Parts of Luke 12:48

#1 “But the one who does not know and does the things deserving punishment will be beaten with few blows.”
It seems from this passage and others like it that just as there will be varying degrees of reward at the Judgement for the fruit borne by believers, there will be varying degrees of punishment for those who have heard the truth but reject it.  The more truth they have been exposed to, the more responsible they will be held for rejecting it.

#2 “From everyone who has been given much, much will be demanded;”
Like the message of the Parable of the Talents (Mt 25:14-30), this teaching of Jesus highlights the principle that men and women are designed by God to bear his image and be managers of the resources, abilities, and the measure of truth that they have been given.  Everything we have is from God.  He will expect us to make the most of what we have been given for his purposes and for his glory.

#3 “and from the one who has been entrusted with much, much more will be asked.”
This seems a restatement of the previous point, emphasizing that when God gives, it is to be considered a trust. He who is given a trust, most prove faithful.  This is a powerful and infinite Kingdom principle that will have ramifications into the New Heavens and New Earth that will come after the Judgment.

ESV
“But the one who did not know, and did what deserved a beating, will receive a light beating. Everyone to whom much was given, of him much will be required, and from him to whom they entrusted much, they will demand the more.”

KJV
“But he that knew not, and did commit things worthy of stripes, shall be beaten with few stripes. For unto whomsoever much is given, of him shall be much required: and to whom men have committed much, of him they will ask the more.”

NKJV
“But he who did not know, yet committed things deserving of stripes, shall be beaten with few. For everyone to whom much is given, from him much will be required; and to whom much has been committed, of him they will ask the more.” 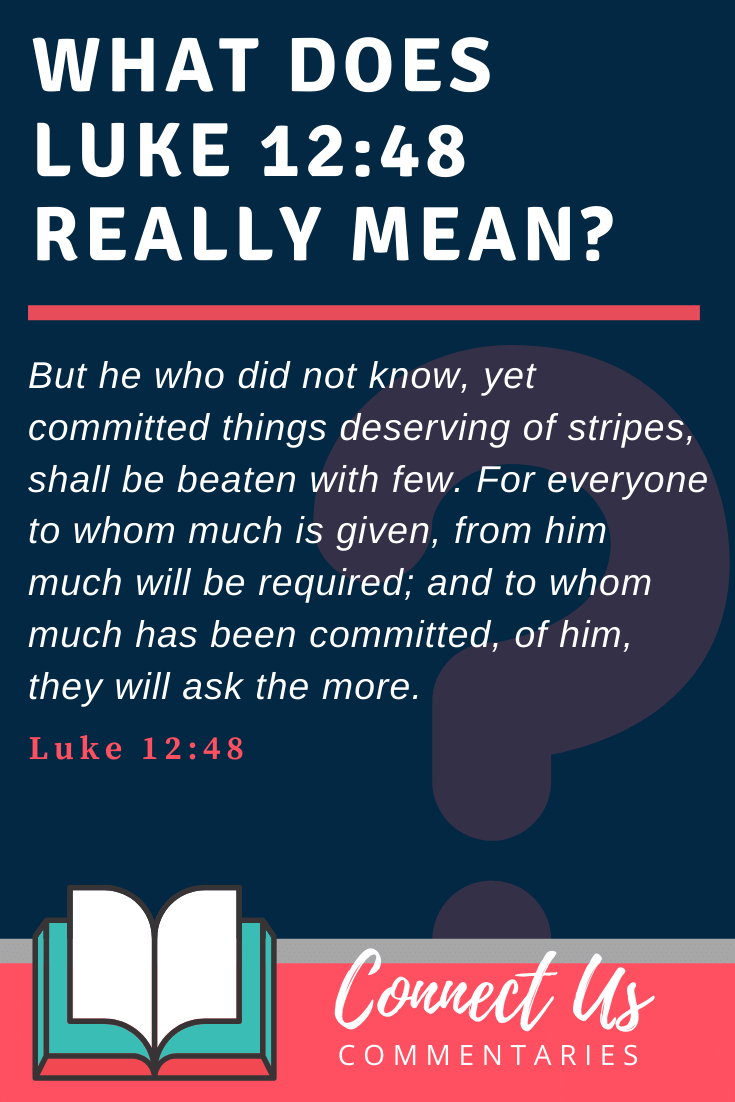