Luke 19:27
“But those enemies of mine who did not want me to be king over them—bring them here and kill them in front of me.”

Explanation and Commentary of Luke 19:27

Spoken at the very end of the parable of the Ten Minas, Jesus seems to be pronouncing judgment on the Jews who are rejecting their long-awaited Messiah. This is an affront to the King and to his Father. Because we Christians are the grateful and blessed recipients of his unfailing mercy, we can sometimes forget the exacting justice of a perfect God. The Jews had no excuse whatsoever to reject God’s Son. In so doing they rejected God the Father (Jn 8:19) while paying lip service to him and pretending to defend the faith. In reality, they loved their form of religion and what it afforded them, but they did not know or love God. Those who did were able to recognize Jesus as the Savior of the world.

For this reason, that God is perfectly just, we humans are able to allow God to be the one who takes vengeance, relieving us of the responsibility. Whether he uses his agent, the state, or natural law, or some other means, God always does what is right. His call to us is to love our enemies and forgive our offenders. We ourselves are saved from his justice by the cross. We are saved by grace and grace alone. Deserving death, we receive a free gift of life. But there will be no wrongs unpunished, whether by God’s punishment on his Son for our sins or by the righteous punishment on the unbeliever for his or her own sins.

Breaking Down the Key Parts of Luke 19:27

#1 “But those enemies of mine…”
Because we know the kind and gracious heart of God through his Son, we would want to reject the idea that God could have any enemies, but instead loves everyone and forgives them. But Scripture is clear that in our sin we are at enmity with God (Ro 5:8). The only way to have peace with him is through salvation in his Son, Christ crucified.

#2 “…who did not want me to be king over them—”
For whatever reason, many of the Jews who seemed devout were not at the end devoted to God, but to their religion. Paul reveals that God has closed the eyes of many of the Jews in order to graft in the Gentiles (Rom 11) and that he will one day open them again, but that does not relieve those who rejected and killed Jesus of responsibility or guilt.

#3 “bring them here and kill them in front of me.”
This was a common scene when a conquering king had been defied. The world has seen much of this rough justice. The reality is that it will be much worse than this for those who reject the free gift of life in Christ and the mercy of God (Mk 9:43).

NIV
“But those enemies of mine who did not want me to be king over them—bring them here and kill them in front of me.”

NLT
“And as for these enemies of mine who didn’t want me to be their king—bring them in and execute them right here in front of me.”

ESV
“But as for these enemies of mine, who did not want me to reign over them, bring them here and slaughter them before me.”

KJV
“But those mine enemies, which would not that I should reign over them, bring hither, and slay them before me.”

NKJV
“But bring here those enemies of mine, who did not want me to reign over them, and slay them before me.” 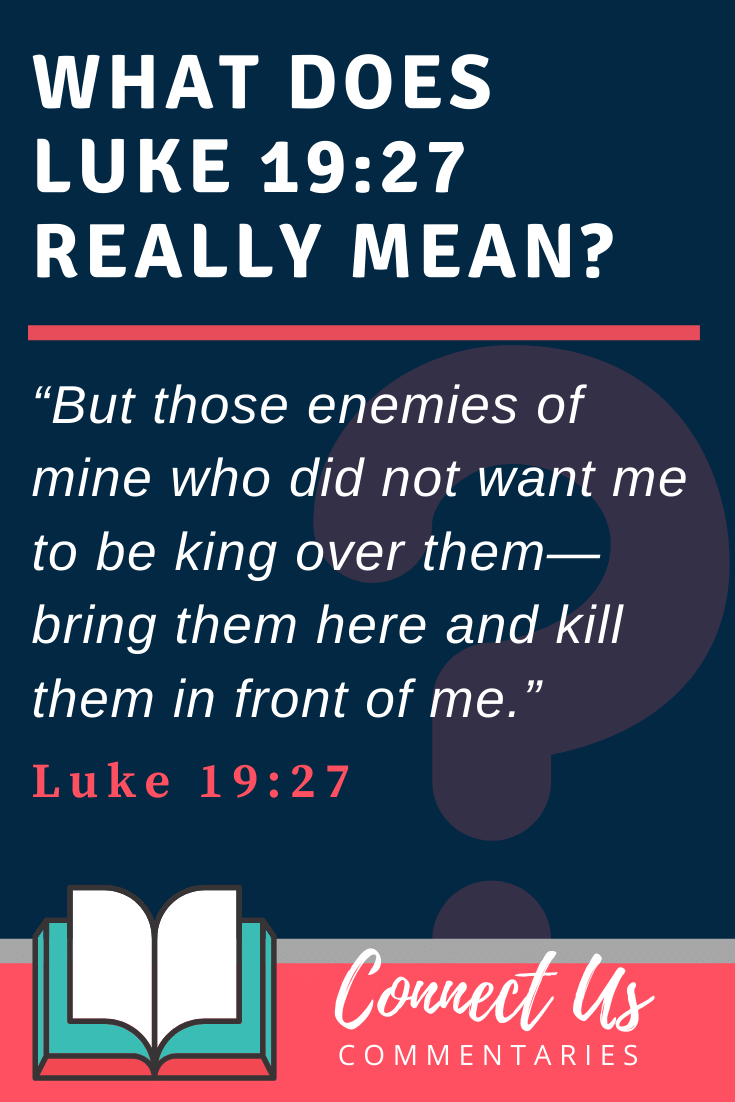