Explanation and Commentary of Luke 22:36

Jesus is entering the final stages of his life and preparing his disciples for what is to come. Scholars are not in total agreement on whether his instruction to carry a sword was literal or metaphorical, but it is certain that he is saying that they will begin to face opposition such as they have not yet.

For us, it can be applied as a statement of gravity about the world we live in and the hostility towards Christ and the Gospel that is still at work among the unbelievers who we are called to reach. The disciple of Jesus is supposed to “Seek first the kingdom of God and his righteousness,” so that “all these things can be added to him” (Mt 6:33) but at the same time we are expected to go out “as sheep among wolves” to be “wise and serpents and gentle as doves” (Mt 19:16).

There also seems to be an element of being prepared for flight that is in view. Christians in many eras of church history and still today face enormous persecution. For these, counting the cost of exercising faith is a very real endeavor.

Breaking Down the Key Parts of Luke 22:36

#1 “He said to them,”
After informing Peter of his impending faithlessness, Jesus turns his attention to the rest of the group. It was time to prepare them for his, and their, greatest trial.

#2 “‘But now if you have a purse, take it, and also a bag;”
The particular lesson that Jesus sought to teach his disciples when he sent them on previous missionary assignments was that they needed to carry nothing and to trust God for provision. But this was different. They would still be required to trust God to provide, but he would provide through the purse they already had, and the bag they already would carry. Sometimes God defended his people by wiping out enemy armies (2 Kg 19:35). Other times he strengthened the arms of his people for war (Ps 18:34). Sometimes he fed them with bread from heaven or by miraculous provision (Ex 16; Mt 14:13-21), but at other times he blessed the fruit of their labor to produce food (Ps 128:2). The main purpose of the speech seems to be that it was time for Jesus to suffer, which would dramatically impact the nature of their role.

#3 “and if you don’t have a sword, sell your cloak and buy one.”
Again, whether metaphorical or literal, things were becoming dangerous. We can at least assume that Jesus does not call us to total pacifism at all costs. In a moment they would point out that they had two swords already. This tells us that a) Jesus had not prohibited them from carrying swords up to then, and b) When Jesus said, “That’s enough” (Luke 22:38) it shows that he is not expecting them to go to literal war against the Romans or the Jews, but could be an exasperated statement, although it doesn’t always get interpreted and read that way.

NIV
He said to them, “But now if you have a purse, take it, and also a bag; and if you don’t have a sword, sell your cloak and buy one.”

NLT
“But now,” he said, “take your money and a traveler’s bag. And if you don’t have a sword, sell your cloak and buy one!”

KJV
Then said he unto them, “But now, he that hath a purse, let him take it, and likewise his scrip: and he that hath no sword, let him sell his garment, and buy one.”

NKJV
Then He said to them, “But now, he who has a money bag, let him take it, and likewise a knapsack; and he who has no sword, let him sell his garment and buy one.” 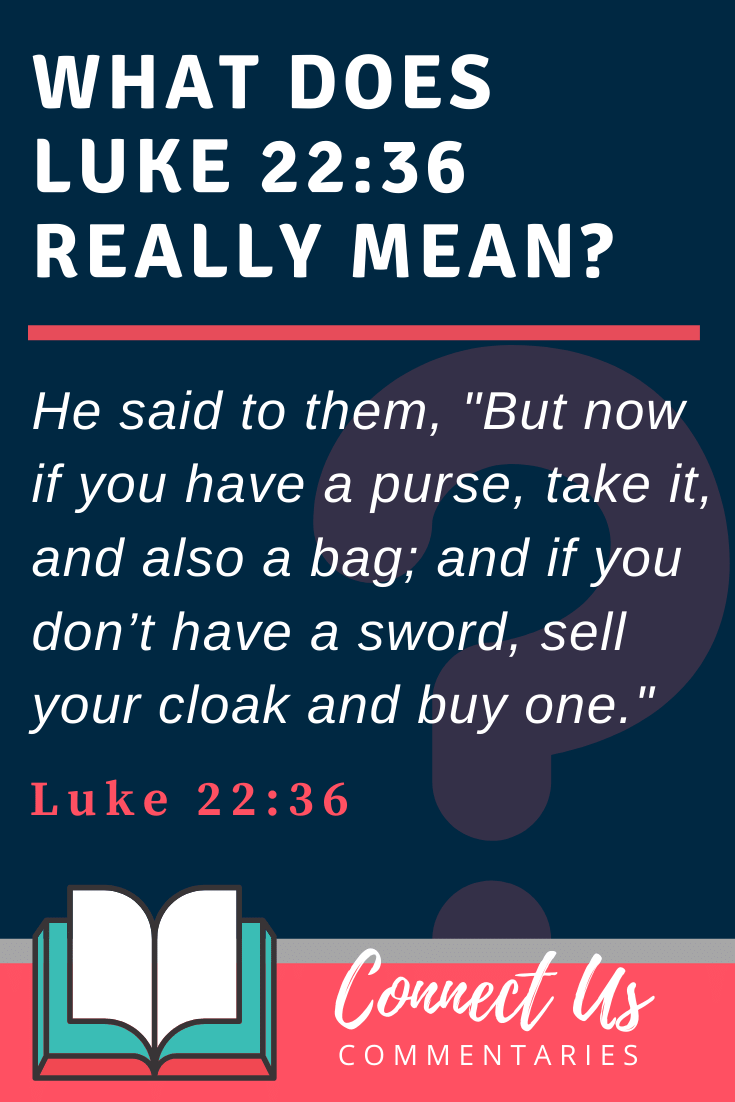