Matthew 13:44
“The kingdom of heaven is like treasure hidden in a field. When a man found it, he hid it again, and then in his joy went and sold all he had and bought that field.”

Explanation and Commentary of Matthew 13:44

Jesus never explicitly says what the kingdom of heaven is, but he spent an enormous amount of time in his preaching ministry describing what it is like. It’s like a man who went on a journey (Mt 25:14), a woman who lost a coin (Lk 15:8), a father with two sons (Mt 21:28), and in this case, “treasure hidden in a field. The image here is striking and conveys that there is nothing more important for a man or woman than to discover this treasure, and then trade it. To be in anyone’s kingdom is to come under their rule and reign, their lordship. One cannot be loyal to two kingdoms, especially if those two kingdoms are opposed to one another, as are the kingdom of darkness, and the kingdom of heaven.

It is joy that should drive us to sell all we have to buy that field. Occasionally, the joy is lost on someone who buys the field out of rationality. They discern that the kingdom of heaven is the right one, and they make the decision, driven by the Holy Spirit, to defect from satan’s kingdom. Their joy is sometimes hidden at first under layers of brokenness and baggage, but as God begins to heal them and show his glory and his desire to bless them, they discover their joy in God more and more. As they learn to walk in freedom, only in hindsight can they see that they sacrificed nothing valuable for the sake of that treasure. They have been far outgiven by God.

Jesus is worth trading all that we have and are to become all that he has created us to be. The only way to know what that is is to sell everything we have, our current way of life, and follow him with our whole heart, turning over our lives to our new king.

Breaking Down the Key Parts of Matthew 13:44

#2 “…a treasure hidden in a field.”
It is a treasure, a “pearl of great price,” and it hides in plain sight in the midst of an enemy kingdom. Once one becomes aware of it, and especially after buying the treasure, it becomes clear how obvious that it was there all along.

#3 “When a man found it, he hid it again,”
It is unclear whether Jesus meant anything explicit about how one comes to God, but it could symbolize an initial reluctance to lay hold of this treasure by one who must wrestle with the idea of selling “all he has.” But it does seem unlikely. The man seems more to be hiding the treasure to keep a competitor from finding it, which doesn’t lend itself to application, but does show the great worth the man sees in the treasure, and a desire to possess it.

#4 “and bought that field.”
While the gift of life and salvation in Christ is free, Jesus also talks about counting the cost of being his disciple. On one side we gain everything, but only after we first lose everything.

NIV
“The kingdom of heaven is like treasure hidden in a field. When a man found it, he hid it again, and then in his joy went and sold all he had and bought that field.”

NLT
“The Kingdom of Heaven is like a treasure that a man discovered hidden in a field. In his excitement, he hid it again and sold everything he owned to get enough money to buy the field.”

ESV
“The kingdom of heaven is like treasure hidden in a field, which a man found and covered up. Then in his joy he goes and sells all that he has and buys that field.”

KJV
“Again, the kingdom of heaven is like unto treasure hid in a field; the which when a man hath found, he hideth, and for joy thereof goeth and selleth all that he hath, and buyeth that field.”

NKJV
“Again, the kingdom of heaven is like treasure hidden in a field, which a man found and hid; and for joy over it he goes and sells all that he has and buys that field.” 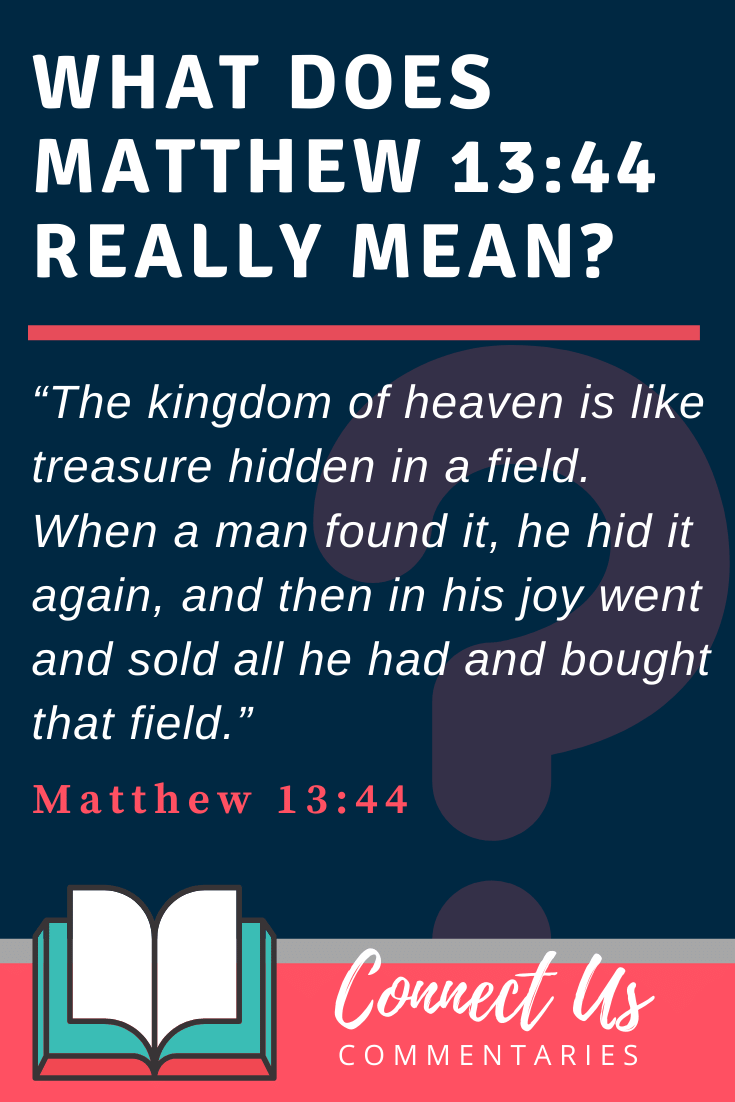