Matthew 19:14
“Jesus said, Let the little children come to me, and do not hinder them, for the kingdom of heaven belongs to such as these.”

Explanation and Commentary of Matthew 19:14

The disciples struggled with pride and self-importance until the day of Pentecost. Jesus’ common remedy was to lift up the attitude and trusting humility of children as one to emulate. His followers were obsessed with their own greatness and were in every way like the world in that respect. Jesus understood this to be a trap from satan, who had tempted Christ in the same ways in the wilderness (Lk 4:6).

Not only did Jesus make time to spend with children in order to bless them, he said that to them belongs the Kingdom of Heaven. Jesus constantly turned their worldly notions of king and kingdom over on its head, causing many to turn back from him. Only those with “ears to hear” (Mk 4:12) would be able to accept this counter-cultural message that so cuts against the natural inclinations of sinful man.

Breaking Down the Key Parts of Matthew 19:14

#1 “Jesus said,”
The Bible is the written Word of God. Genesis 1:1 could have started out, “Jesus said.” But here the Word written relates the Word spoken, by the Word become flesh (Jn 1:14). All of it is infallible. All of it is inspired. Some of it is of greater significance. This verse ranks high on the list of fundamental truths about God’s nature and what he desires of us by way of humility.

#2 “Let the little children come to me,”
Even in Jesus’ local churches, kids’ ministry is nearly always undervalued because children are undervalued. If they are valued highly, it is in the wrong way, and for the wrong reasons. Even Christian parents harm their children by making them the center of the universe and the home. Rather, we should give attention to their character, teaching them that God is the center of the universe.

#3 “and do not hinder them,”
Bad parenting “hinders” little children from coming to Jesus. Parenting with anger, failure to apply loving discipline, and failure to show by example the way to be a disciple, are all common ways that we hinder children from coming to Jesus. In the western church today, the mistake is to overly entertain children. The true goal for many churches is not the discipleship of children, but rather the attraction of the families to the church in competition with other churches. As a result, children grow up and leave the church as soon as they can.

#4 “for the kingdom of heaven belongs to such as these.”
Childlike faith takes great courage. Jesus seemed to mean that children have a special place in God’s Kingdom, but that also those who bear themselves like children in a certain way (Mk 9:36) will inherit the Kingdom. God calls us to trust him as a child who trusts his father. God calls us to not think highly of ourselves and to see our identity in our Father in heaven, in much the same way that a child seeks identity in her earthly father.

NIV
Jesus said, “Let the little children come to me, and do not hinder them, for the kingdom of heaven belongs to such as these.”

NLT
But Jesus said, “Let the children come to me. Don’t stop them! For the Kingdom of Heaven belongs to those who are like these children.”

ESV
But Jesus said, “Let the little children come to me and do not hinder them, for to such belongs the kingdom of heaven.”

KJV
But Jesus said, Suffer little children, and forbid them not, to come unto me: for of such is the kingdom of heaven.

NKJV
But Jesus said, “Let the little children come to Me, and do not forbid them; for of such is the kingdom of heaven.” 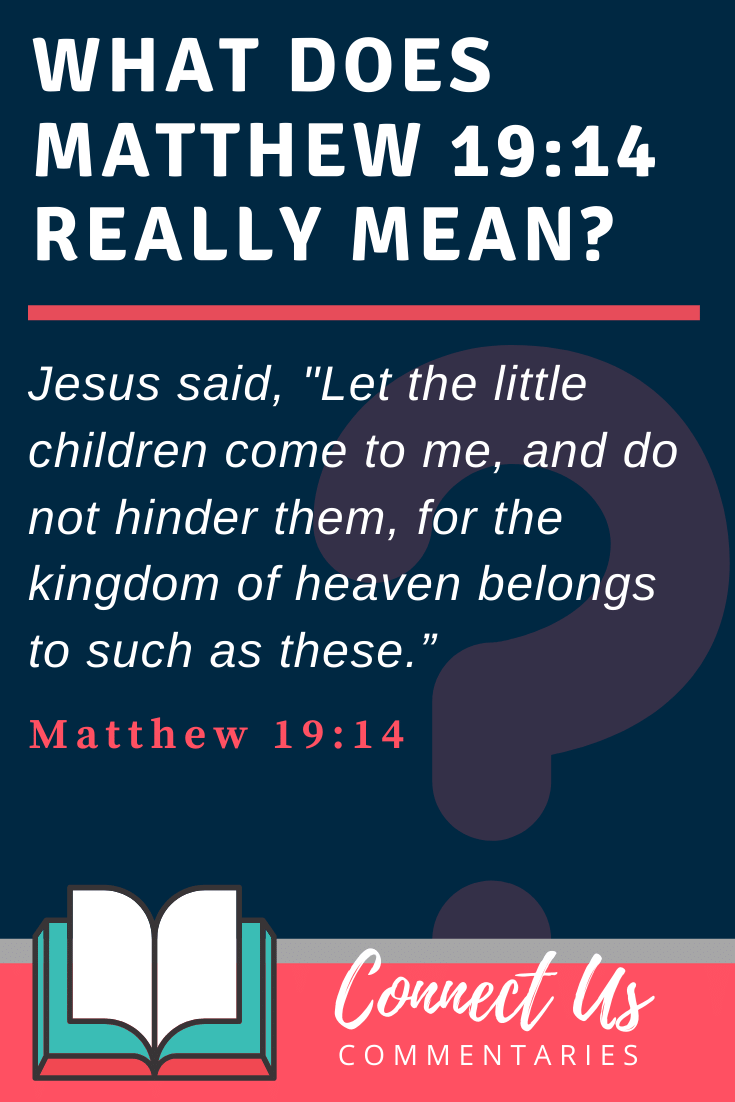