Matthew 21:16
“‘Do you hear what these children are saying?’ they asked him. ‘Yes,’ replied Jesus, ‘have you never read, “From the lips of children and infants you, Lord, have called forth your praise”?’”

Explanation and Commentary of Matthew 21:16

Indignant upon hearing, “Hosanna, to the Son of David,” the chief priests and teachers of the law confronted Jesus. Jesus quotes Psalm 8:2 to explain what was taking place. Jesus would teach others after his resurrection that the entirety of the Old Testament is about him. Much of his earthly ministry was a fulfillment of Old Testament prophecy. The occasion of this verse is the entrance of Jesus into the second Temple of Jerusalem, where he cast out the money changers, preached every day, healed the sick, and cast out demons. Contrary to what we know of the first Temple and the Tabernacle before that, the only time the presence of God entered the second temple was here and when Christ first entered at age twelve (Lk 2:49).

This verse and others like it should also put to rest the ridiculous notion that Jesus did not consider himself to be God the Son. That heresy persists as a result of unbelief, but it can never be authenticated by even a cursory reading of the Gospels. Jesus was extremely careful in his activities, particularly those of his final days. The only reasonable response for his followers today is the same as it was on the day in question: praise and the blessing of his holy name.

Breaking Down the Key Parts of Matthew 21:16

#1 “‘Do you hear what these children are saying?’ they asked him.”
The religious establishment was indignant and looking for a way to convict Jesus of blasphemy. If he hears their praise, then he should contradict it, or prove his guilt.

#2 “‘Yes,’ replied Jesus,”
He had indeed heard it and accepted it as the righteous praise of God. He would not shy away from their accusation, instead, being close to the time of his sacrifice, he doubled down, incurring more of their wrath.

#3 “‘have you never read,’”
Jesus enjoyed calling the attention of the so-called teachers of the law to the very law by which they claimed their expertise and authority. This often served to shame and silence them. Now it was intended to incite their malice.

#4 “‘From the lips of children and infants you, Lord, have called forth your praise’?”
Children and infants do not have the reasoning capability to choose to put their faith in God, but he sees their utterances as praise to himself. It is also true that godly parents will teach their children to praise God as soon as they can talk, and rightly so.

NIV
“Do you hear what these children are saying?” they asked him. “Yes,” replied Jesus, “Have you never read, ‘From the lips of children and infants you, Lord, have called forth your praise?’”

NLT
They asked Jesus, “Do you hear what these children are saying?” “Yes,” Jesus replied. “Haven’t you ever read the Scriptures? For they say, ‘You have taught children and infants to give you praise.’”

ESV
And they said to him, “Do you hear what these are saying?” And Jesus said to them, “Yes; have you never read, ‘Out of the mouth of infants and nursing babies you have prepared praise?’”

KJV
And said unto him, “Hearest thou what these say?” And Jesus saith unto them, “Yea; have ye never read, ‘Out of the mouth of babes and sucklings thou hast perfected praise?'”

NKJV
And said to Him, “Do You hear what these are saying?” And Jesus said to them, “Yes. Have you never read, ‘Out of the mouth of babes and nursing infants You have perfected praise?’” 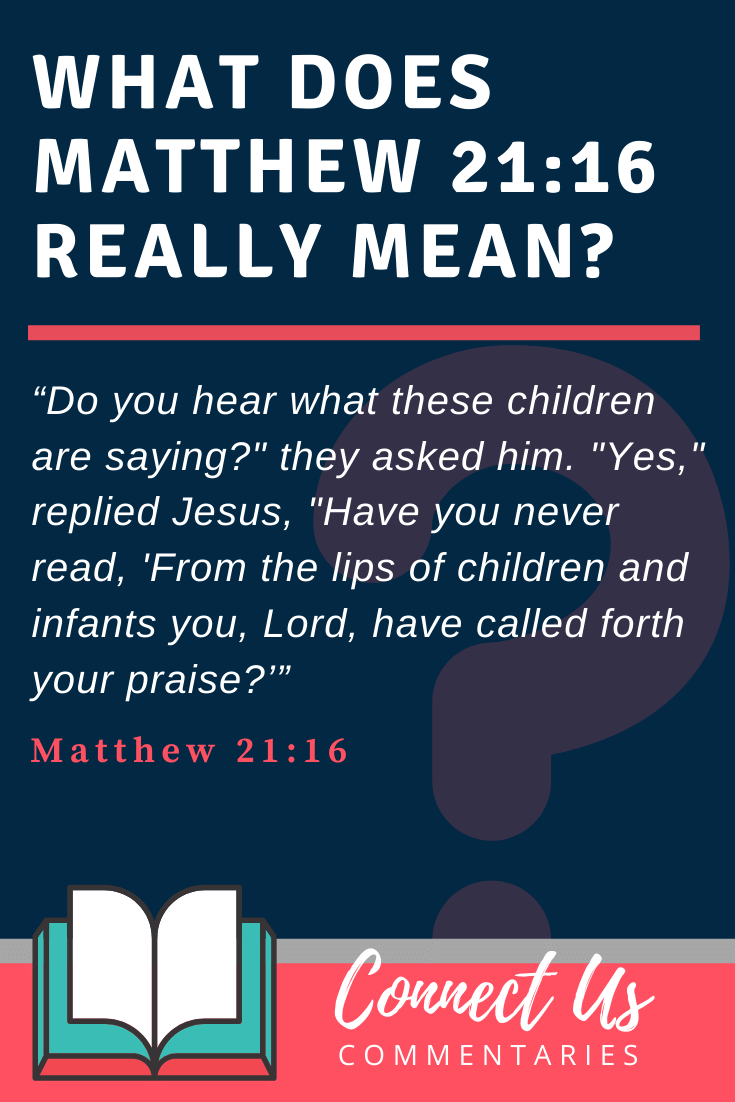