Explanation and Commentary of Matthew 23:12

Here is a principle that runs all the way through Scripture. Jesus is discoursing with his disciples on the human tendency to elevate oneself in the eyes of others. He is specifically warning them against becoming like the teachers of the law and the Pharisees. From the way they dress to the way they do ministry, everything they do is for show and for the sake of being respected and revered in the marketplace. Jesus knows that if he does not explicitly teach his church not to do the same, the human hearts of his disciples will lead them down the same wrong path. It is interesting how prone those in ministry today are to the same sin.

The application is much wider than the present one of how a minister should carry and conduct himself. Those who exalt themselves in any realm would be just as guilty of hubris and just as bound for humiliation by God. There is a kind of pride that does not exalt oneself in the eyes of others. This kind is the pride of knowing that oneself has integrity and has done what has been required of an image-bearing man or woman on earth. It is a just self-respect for one who knows God, knows what he requires, and walks with him. It is not a pride that depends on the praise of man. But Jesus is speaking here of the arrogance of living one’s life for the sake of being exalted by others, of seeing people hierarchically and spending one’s energy climbing the ladder of status. Those who climb in order to be seen at the top will be humbled by a great fall, in this life or the next.

Breaking Down the Key Parts of Matthew 23:12

#1 “For…”
The statement caps off a teaching on humbly serving God, not for show or elevation of status and titles, but by bowing low and taking the place of a humble servant for the sake of the people.

#2 “…those who exalt themselves…”
One can exalt oneself by choosing the highest position at the table, by insisting on titles, or by lording over another. One can even exalt themselves by the way one dresses and carries oneself.

#3 “…will be humbled,”
Jesus promises a fall to the one who lifts himself up above others, thinking he or she is somehow better. It is no problem to see that oneself has a higher competence than another, but it is important to attribute that to grace and see other people as intrinsically valuable because of their Creator. One may also fill an official position that ranks them high in a society or an organization, but such positions are always invested by an outside authority, which is invested by God. As such, there is no reason to exalt themselves. If one does get a haughty spirit because of such things, God will see to it that one is brought down.

#4 “and those who humble themselves will be exalted.”
This is done by simply remembering that God does not call us to think of any relationship whatsoever as vertical or hierarchical, rather, all interpersonal relationships are to be horizontal. If there is any distinction between persons, the Christian is to take the lower position. As someone once said, it is not thinking less of oneself, but thinking of oneself less. God will decide who becomes great (Gen 12:2) in the eyes of the world. It is not a thing one should aspire to, but if God does it, it is for a reason, and he will elevate only those who humble themselves, knowing that everything they have is by God’s gracious hand. For some, God may have a reason to exalt them in this world, but for most, it will wait until the next. 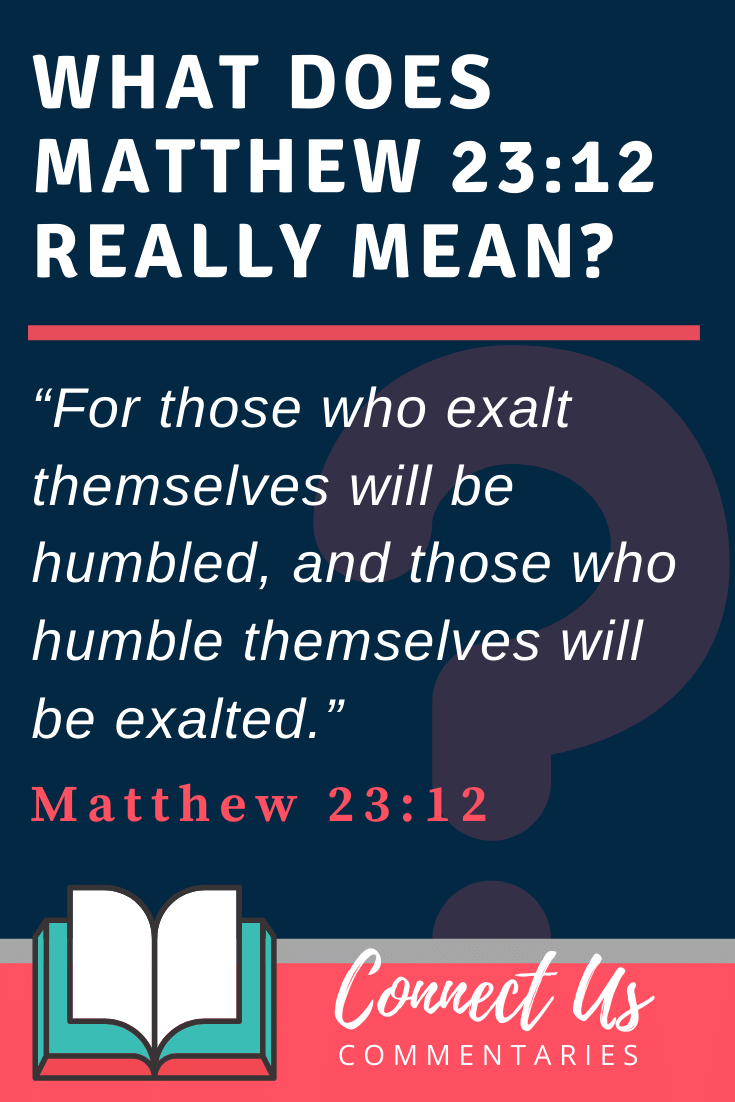