Matthew 5:18
“For truly I tell you, until heaven and earth disappear, not the smallest letter, not the least stroke of a pen, will by any means disappear from the Law until everything is accomplished.”

Explanation and Commentary of Matthew 5:18

Jesus did not come to abolish the law, although that is one of the things he was accused of. He came to fulfill the ceremonial law, which was all designed by God to point to the truth of Jesus. Laws for cleansing, expiation, and atonement, no longer needed to be kept, but Jesus was the end of all of it, being the perfect sacrificial lamb.

The law was a guardian, according to Paul (Gal 3:24-29). He used the example that a young heir to a fortune and an estate will be under the rule of his nanny. The law was the way for us to know what sin was. The law increased our accountability, but also by keeping it, the Jews could live in harmony with God in anticipation of the fulfillment of that law.

But the law was powerless to change us. Christ did not abolish the law, but by keeping it perfectly and then imputing his righteousness to those who believe, he has fulfilled it. The law always pointed to the coming Christ. Now that he has come we no longer must keep ceremonial laws meant to set us apart from the unbelieving world, destined for wrath (Jn 3:36).

Breaking Down the Key Parts of Matthew 5:18

#1 “For truly I tell you,”
This comes after Jesus explains that he has not come to abolish the law. The section will end with the warning that their righteousness must surpass that of the Pharisees who were a sect of Judaism that was committed first and foremost to keep not only the whole law but hundreds of sub laws within it. They would surpass it by moving past behavior and into the motives and secret desires of the heart.

#2 “until heaven and earth disappear,”
There will come a day when heaven and earth will disappear. We currently live in the midst of the Church Age, which began with the life, death, and resurrection of Christ and the coming of the Holy Spirit at Pentecost. The Book of Acts gives an account of the beginning of the Age, and we are hopefully at the end when Jesus will soon appear with his powerful host of angels and the dead in Christ shall rise to meet him, along with those who are in Christ and still living. There will be a great judgment and heaven and earth will pass away to be replaced by the New Heavens and the New Earth, with the New Jerusalem coming out of the sky (Rev 21:2). The seeds of the New Heavens, the New Earth, and our new glorified bodies are all within their current forms. Whatever we do now for the Kingdom of God we do to build for this future reality (1 Cor 15:58).

#3 “not the smallest letter, not the least stroke of a pen,”
Jesus was saying that, contrary to what it seemed to the Jews, he was not trying to abolish the law. It would be revealed throughout his ministry that he was, however, trying to make it stricter (Mt 5-7), and also refine their understanding of it. For instance, his persistence in breaking their man-made rules to heal on the Sabbath was meant to show them that God’s mercy was being violated by their interpretation of the laws of Sabbath-keeping.

#4 “will by any means disappear until everything is accomplished.”
When “everything is accomplished,” Jesus will have returned. The full number of Christians will be saved. The Jews who will believe will have been grafted back into the Vine (Ro 11:23). Satan, sin, and death will have been vanquished. We will live in the presence of God in the New Heavens and Earth, in the New Jerusalem. We will have “seen Jesus as he is” (1 Jn 3:2) and will have been changed at the last trumpet, being clothed with immortality, receiving a new, spiritual, physical, glorified body without sin in it (1 Cor 15:52). There will be no need for any law of any kind to be spelled out and written down. The laws of love will be written on our hearts (Ro 2:15).

NIV
“For truly I tell you, until heaven and earth disappear, not the smallest letter, not the least stroke of a pen, will by any means disappear from the Law until everything is accomplished.”

NLT
“I tell you the truth, until heaven and earth disappear, not even the smallest detail of God’s law will disappear until its purpose is achieved.”

ESV
“For truly, I say to you, until heaven and earth pass away, not an iota, not a dot, will pass from the Law until all is accomplished.”

KJV
“For verily I say unto you, Till heaven and earth pass, one jot or one tittle shall in no wise pass from the law, till all be fulfilled.”

NKJV
“For assuredly, I say to you, till heaven and earth pass away, one jot or one tittle will by no means pass from the law till all is fulfilled.” 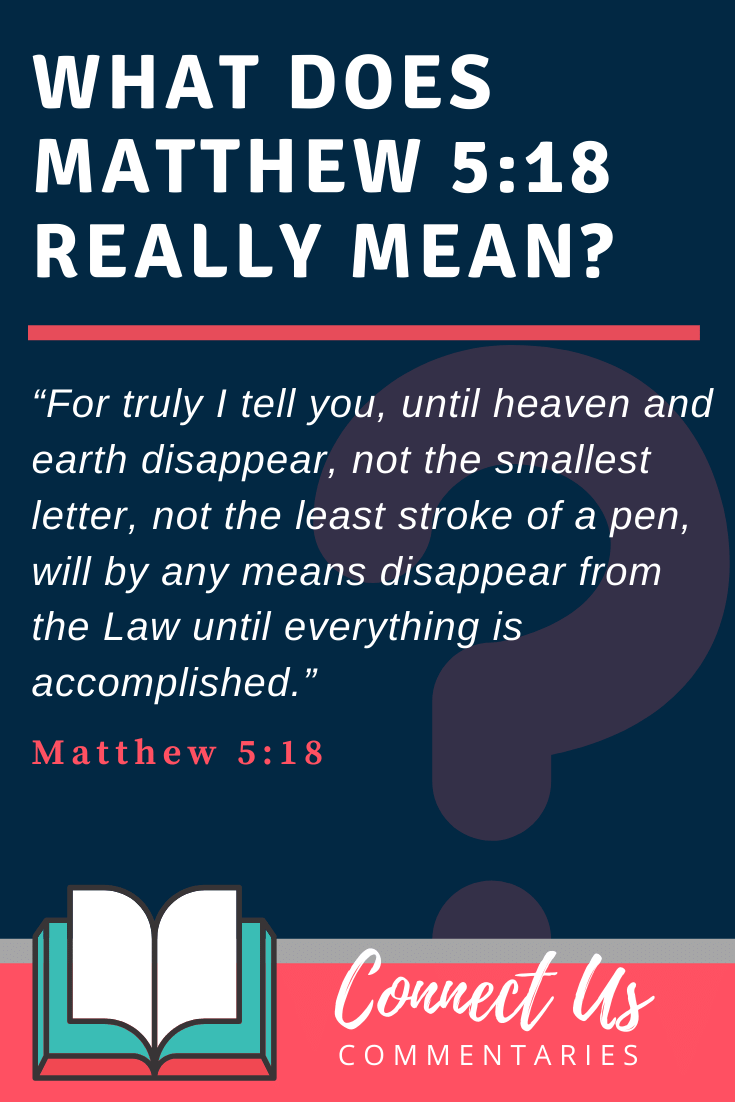