This is part of a passage that is cherished by believers everywhere. Paul begins by stating that he has not yet arrived at perfection, but it is something he works toward each day; he then repeats this statement in the context of his calling to preach the Gospel of Jesus Christ. He does not claim any perfection of his own but instead relies upon the strength and power of Christ to work this goodness in him.

Putting Off the Old Man

Paul knew from firsthand experience how a life can be changed from hindering the Gospel to proclaiming it. Originally named Saul, he grew up and studied under the strictest Jewish traditions, and when Jesus’ disciples began proclaiming His resurrection and status as God’s chosen Messiah, he quickly and violently opposed them. He arrested followers of Jesus and threw them in prison, advocating for fierce punishment and even securing permission from his superiors to go to other areas in the region to do the same.

But Saul’s course and supposed purpose in life were completely derailed by Jesus, Who met him on the road to Damascus. His glory blinded Saul, and this experience caused Saul to reorient his life around the preaching of the Gospel of Jesus. He fully understood the nature of Jesus’ life and sacrificial death, and appropriately applied prophecies he had cherished since childhood to find their fulfillment in Christ.

This cost him virtually everything he knew, as he abandoned his life as a Pharisee and instead devoted himself to preaching the Gospel. At one point, he changed his name from Saul to Paul, which could have been a mark of his transformation.

First, he sought to convince his fellow Jews that Jesus really was the Messiah they had waited for; but time and again he was denied. When it was clear that the Jews would not receive him, Paul dedicated himself to preaching to the Gentiles, peoples of other nations that were considered unworthy because they were not God’s chosen people. However, the clear teachings of Jesus and the message of the Old Testament was that God wanted to save all nations, including the Gentiles; and the Gentile churches joyfully received the Gospel as Paul presented it to them. He spent most of his life traveling across the region, founding and supporting churches and keeping Jesus at the center of his teachings.

How to Forget What Is Behind

Paul’s message in this verse is that we should leave behind the parts of our lives that keep up from being completely and totally devoted to Jesus. Any sin or selfishness that distracts our hearts from God should be deliberately laid aside, and we should constantly reach for holiness and righteousness. It creates an image of a work in progress – Paul says that he has not yet attained this perfection, and his striving for God’s goodness is a perpetual state of action.

His goal was no longer righteousness in his own eyes, but in God’s eyes by giving himself to Jesus Christ. This is the only reason he can claim righteousness and look forward to restoration to God, and this is the clear message for us as we look forward to our resurrection when Jesus comes again. We cannot achieve sinless perfection on earth, but we should always work toward God’s purpose in our lives and trust in the power of the cross of Jesus to get us there.

What Not to Leave Behind

It’s important to pause and acknowledge the things that we should still carry with us. Paul was a Pharisee and was expected to be an expert in knowing and applying Jewish law. His original path to fulfilling that law meant persecuting Christians. However, the Jewish law (which we know as the Old Testament of the Christian Bible) points to the promised Messiah: every page and prophecy is littered with the mention and promise of the One God promised to send to redeem His chosen people. In this way, the Old Testament is all about the coming of Jesus.

When Paul realized this and refocused his life on proclaiming the Gospel of Jesus, he did not throw away everything he had learned. Instead, he properly interpreted and applied these prophecies to point back to Jesus. It would have been very easy for him to completely abandon his heritage and upbringing, but instead, he brought his knowledge and experience to work for the Gospel, instead of against it.

We can apply this principle in our own lives as well. We should certainly lay aside every sinful habit and thought pattern in our lives because it keeps us from God. However, there are still many good things in our lives: godly influences, prior experiences with God, and our own gifts and abilities that God gave us even before we recognized Who gave them to us. We should not callously ignore the ways that the Holy Spirit can work in our lives through our talents and knowledge; this also puts us on a path away from God.

Instead, we should bring everything God has given us to bear as we push forward to be His disciples in the world. We should forget our sinful lives that were in a state of separation from the Father, and reach with outstretched arms, with all our mind and heart and strength, with everything we have to reach what Jesus has in store for us. This is the only way to live a life that is full of purpose and meaning, and this is what Paul has modeled for us throughout his epistles. This is a goal we can never reach on this side of heaven, but we can do our very best to live in a manner worthy of the Gospel, so that when we do reach heaven God will call us – like Paul – His good and faithful servant. 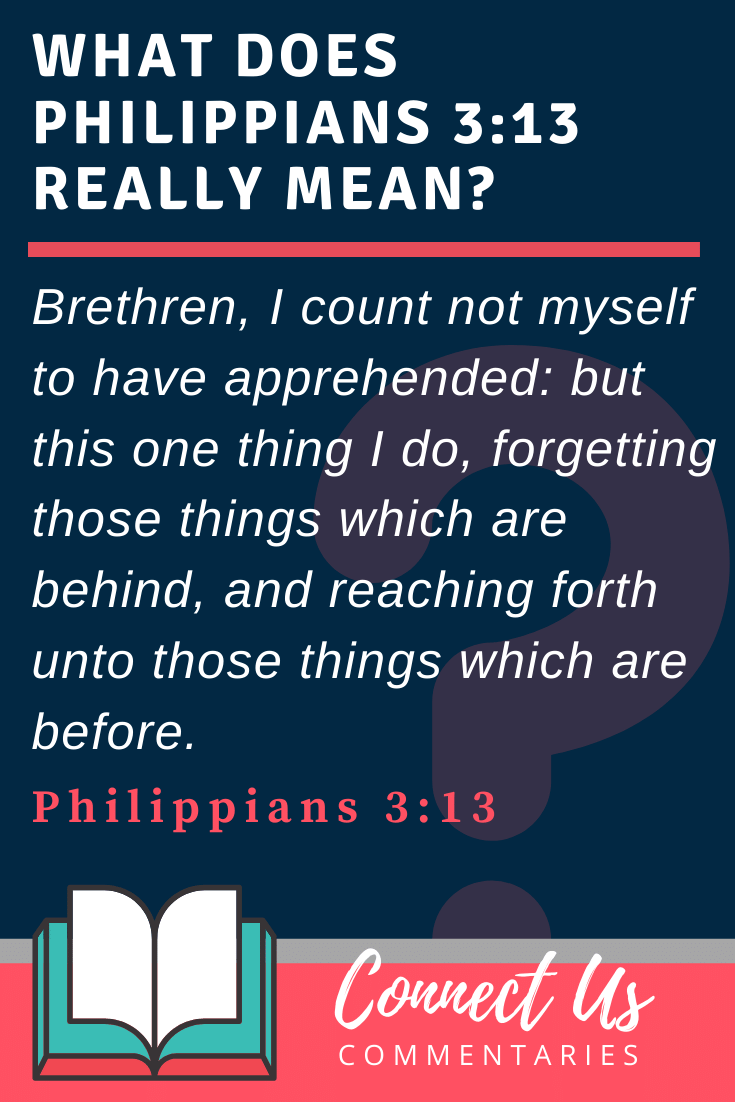