Proverbs 21:9
“Better to live on a corner of the roof than share a house with a quarrelsome wife.”

Explanation and Commentary of Proverbs 21:9

One of the most common weaknesses in man is his inability to control his impulse for physical pleasure, or his deeply held desire to win approval from a woman. Present culture is the fulfillment of hundreds, if not thousands of years of the cultivation of some sort of female worship, whether it was the local goddess, priestess, mother, or the culture of chivalry that said go and fight, and die for a queen who has given you nothing but her handkerchief to carry in your armor.

But from this proverb, it is clear that men have faced this problem since the beginning, maybe even since Eden. It is prudent for a man to know who he is in Christ, to then find a godly woman to be his wife and helpmeet, treating her well as his equal, but also leading her with his regenerated mind and in the truth of the Bible. If she is quarrelsome, it is likely because he has compromised for her approval or physical pleasure.

For a godly woman, it is right to speak the truth to her husband as his main counsel and to be direct but loving and respectful as she approaches him. This is all very complicated, as each situation is different with different circumstances, but what the proverb says is true, having no wife is better than having a quarrelsome wife. A man should take care that he loves his wife as Christ loves his Church, and he should pursue righteousness and follow Jesus with all his heart. If he is doing these things and his wife is quarrelsome, perhaps the corner of the housetop would be preferable for a time.

Breaking Down the Key Parts of Proverbs 21:9

#1 “Better to live on a corner of the roof…”
It was likely a common occurrence for a man to retreat to his rooftop when things in the house were contentious. In a time when men had the right to inflict physical harm on their wives, it would have been a merciful thing for him to retreat, rather than retaliate. Roofs were flat, and lounging on top of them was a common activity. Some even built rooms on their rooftops.

#2 “…than share a house with a quarrelsome wife.”
This verse does not teach that it is better to avoid any conflict, or that a married couple should not seek to work things out, but it does teach that to give in to quarrelsomeness would not be better than taking at least a short break from being together. As stated above, for both members to root their identities firmly in Christ is step one toward having a harmonious and godly marriage that reflects the mystery of Christ and his bride, the Church (Eph 5:32). In general, the principle holds true that “He who finds a wife finds what is good and receives favor from the LORD” (Prov 18:22).

NIV
Better to live on a corner of the roof than share a house with a quarrelsome wife.

NLT
It’s better to live alone in the corner of an attic than with a quarrelsome wife in a lovely home.

ESV
It is better to live in a corner of the housetop than in a house shared with a quarrelsome wife.

KJV
It is better to dwell in a corner of the housetop, than with a brawling woman in a wide house.

NKJV
Better to dwell in a corner of a housetop, Than in a house shared with a contentious woman. 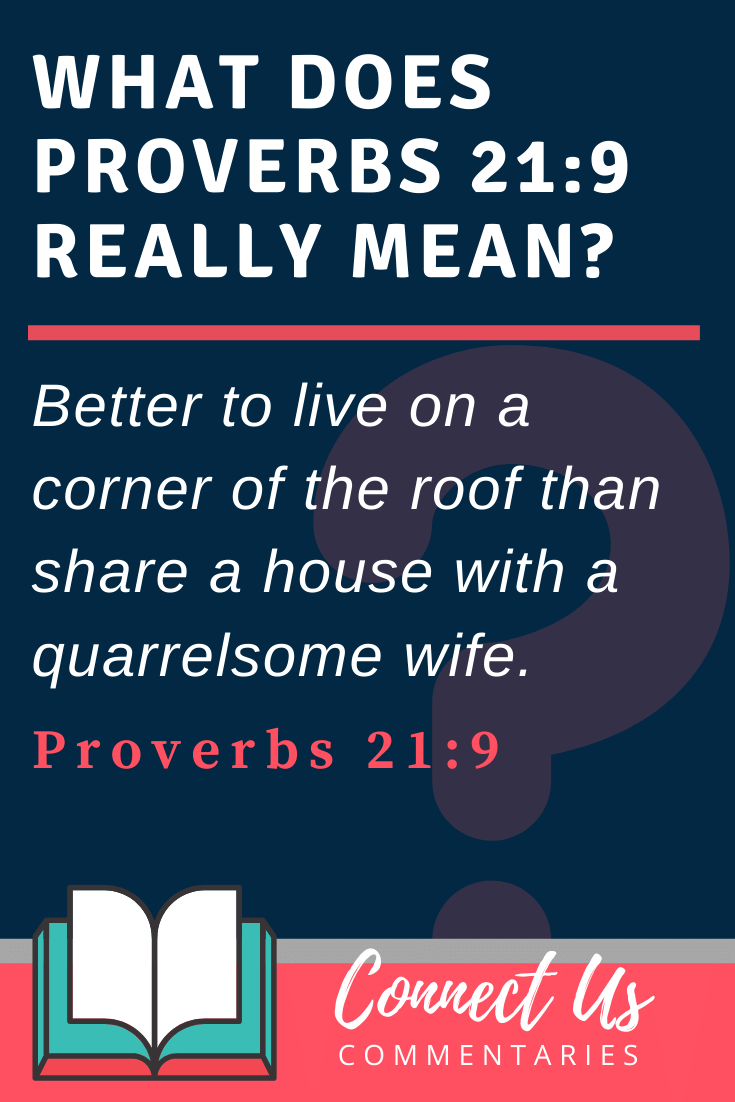