Proverbs 22:29
“Do you see someone skilled in their work? They will serve before kings; they will not serve before officials of low rank.”

Explanation and Commentary of Proverbs 22:29

In the beginning, God created man on the sixth day. He blessed him and gave him a mandate to “Be fruitful and increase in number; fill the earth and subdue it. Rule over the fish in the sea and the birds in the sky and over every living creature that moves on the ground” (Gen 1:28). And then in Genesis 2:16, it says, “The Lord God took the man and put him in the Garden of Eden to work it and take care of it.”

Before the fall, man was created to work as a delegated authority over creation. After the fall, the work became much more difficult (Gen 3:17-19). But even after the fall, man glorifies God by working. After the return of Christ, and the coming of the New Heavens and the New Earth (Rev 22:1-3), the saints will continue to productively glorify God by working in his Kingdom, free from the trials that came by the curse.

Good work for the Christian is an end in itself, and if done correctly, it will be a blessing to the one who engages in it. In this way, one can build a great deal of skill with patient practice. This proverb commends skilled craftsmanship as a way to gain favor with high ranking officials. Seek to do good work for the glory of God, but do not be surprised if that skill and work ethic leads to earthly rewards, not guaranteed, but likely.

Breaking Down the Key Parts of Proverbs 22:29

#1 “Do you see someone skilled in their work?”
It is a treat to see a true craftsman at his craft. Skilled work is becoming rare in these days of technological advances and industrialism. In whatever work God has called you to, or at least provided for you to do, seek to do it to the best of your ability, to the glory of God (1 Cor 10:31). Learn to love work for work’s sake, and God will bring about the fruit of your labor. “The sleep of a laborer is sweet, whether they eat little or much” (Ecc 5:12).

#2 “They will serve before kings;”
Often quoted by his father, Ben Franklin recalled that this verse literally came true for him. He set out to learn the skill of printing, and it placed him on a path that put him before five kings throughout the course of his life. But even if one doesn’t work for a literal king, the point is clear: Those who have disciplined themselves to become highly skilled in their profession will not only find benefactors in high places but will be the kind of people who are sought after for their help by those same officials.

#3 “they will not serve before officials of low rank.”
In Exodus 31:1-6 it says, “Then the Lord said to Moses, “See, I have chosen Bezalel…and I have filled him with the Spirit of God, with wisdom, with understanding, with knowledge and with all kinds of skills…and to engage in all kinds of crafts…Moreover, I have appointed Oholiab… to help him. Also I have given ability to all the skilled workers to make everything I have commanded you…” These craftsmen were said to be filled with the Spirit of God to go before the Judge of Israel for the work of the Tabernacle and the Ark. Good work is godly and brings glory to God who uses it for his purposes.

NIV
Do you see someone skilled in their work? They will serve before kings; they will not serve before officials of low rank.

NLT
Do you see any truly competent workers? They will serve kings rather than working for ordinary people.

NKJV
Do you see a man who excels in his work? He will stand before kings; He will not stand before unknown men. 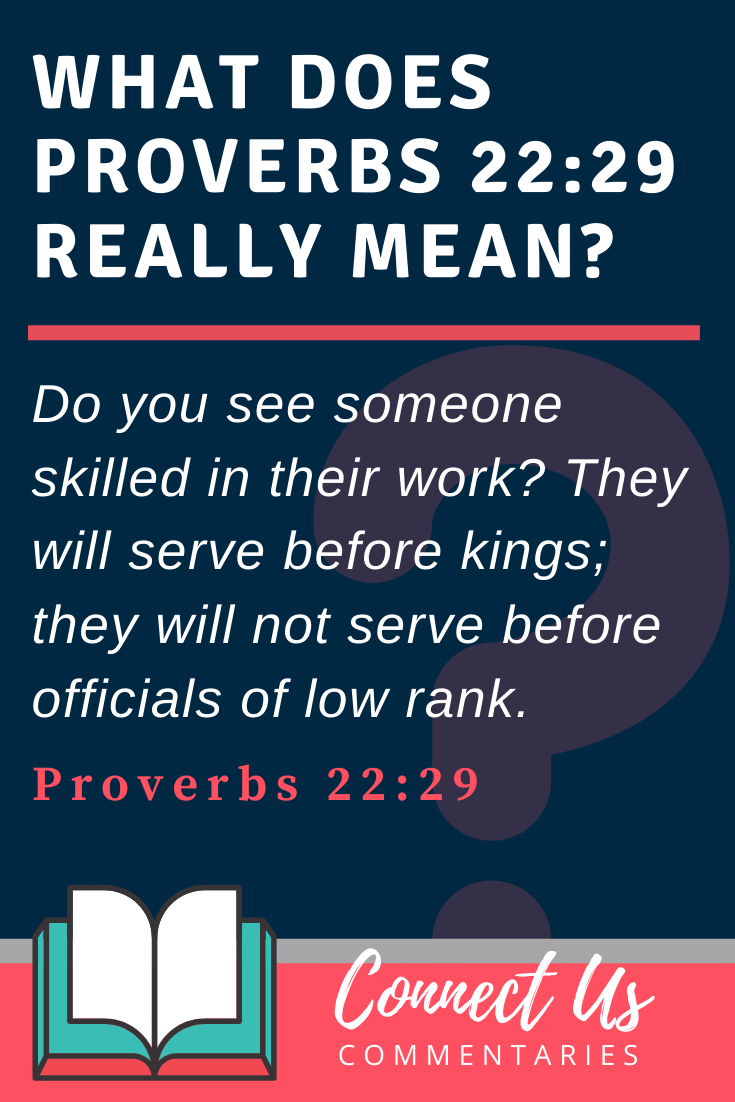