Proverbs 25:28
“Like a city whose walls are broken through is a person who lacks self-control.”

Explanation and Commentary of Proverbs 25:28

It is not just that the city has no walls and is vulnerable to attack, but that its “walls are broken through.” The enemies are within and beginning to pillage. What are the enemies in the flesh which are pillaging the “person who lacks self-control?” They are the inclinations and impulses of passion. They are procrastination, impurity, and appetite. This is not a person who is in control, but rather who is being controlled by the sin within. Even the Christian, whose Spirit resides in a jar of clay (2 Cor 4:7), must cultivate the quality of self-control to live a truly godly life.

Self-control is a fruit of the Holy Spirit and as such, it is difficult to gain by focusing on it. There may be some measure of success when one puts one’s mind to learning self-control, but far more efficacious would be to walk by the Holy Spirit, to focus one’s eyes on Jesus, and to go where he leads, to abide in him (Jn 15:4). In this way, all the fruit of the Spirit will grow in the man or woman: love, joy, peace, forbearance, kindness, goodness, faithfulness, gentleness, and self-control (Gal 5:22-23 emphasis mine).

When a person becomes self-controlled, not only are a multitude of enemies expelled and kept at bay, one can walk in freedom knowing that, in Christ, the walls of protection are unbreachable.

Breaking Down the Key Parts of Proverbs 25:28

#1 “Like a city…”
The man or woman is likened to a city. A human is an entity in which there are systems and subsystems that must work efficiently for life to continue. Where these systems, including the boundaries around the entity itself, break down, there will be trouble.

#2 “…whose walls are broken through…”
A city or a person unprotected will be in reaction mode every minute of every day. A human who has not defended themselves against the passions of the flesh will have no power over those passions and will do their bidding.

#3 “…is a person who lacks self-control.”
The mark of maturity is control of the self. This is nearly impossible to do in one’s own strength without counterbalancing one sinful impulse with another. For instance, one could tap into the sin of vanity to control the sin of gluttony. But with the Spirit’s help, the one who abides in Christ and loves the stewardship of the mind and body will have a maturity that is as strong and powerful as walls around a secure city.

NIV
Like a city whose walls are broken through is a person who lacks self-control.

NLT
A person without self-control is like a city with broken-down walls.

ESV
A man without self-control is like a city broken into and left without walls.

KJV
He that hath no rule over his own spirit is like a city that is broken down, and without walls.

NKJV
Whoever has no rule over his own spirit Is like a city broken down, without walls. 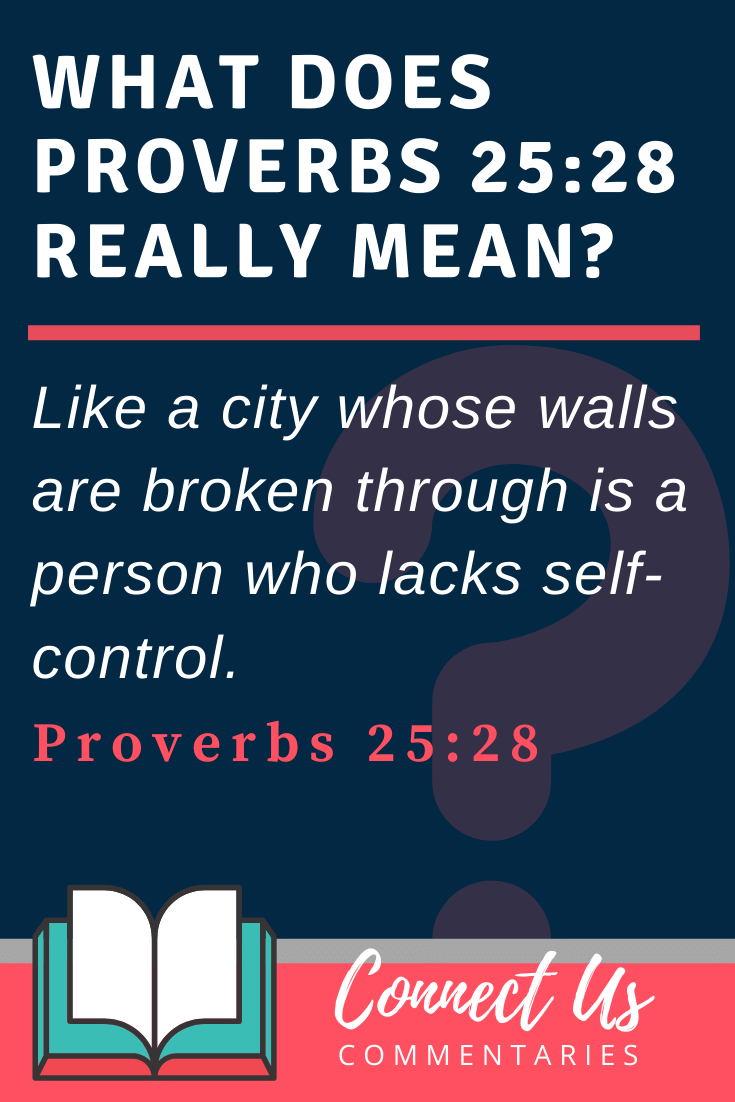