Proverbs 29:25
“Fear of man will prove to be a snare, but whoever trusts in the Lord is kept safe.”

Explanation and Commentary of Proverbs 29:25

Many of the Jewish leaders wanted to follow Jesus, but they failed to turn to him, “for they loved human praise more than praise from God” (Jn 12:43). Fear of man is a deadly curse of the sin nature and makes the world go around in the kingdom of darkness. It is the fear of man that makes people compromise on what they believe. It is the fear of man that causes men and women to look to others and public opinion to know what to think about things. The fear of man has not only kept some people out of the Church but has also driven some into the Church under false pretenses in times when the Church was strong.

But the fear of man will always prove to be a snare for anyone who does not truly learn to root her identity in Christ and in her adoption as a child of God. This person can trust “in the Lord” and be “kept safe.” The snare of the “fear of man” is one that rarely lets go of those who fall captive to it. Trusting in the Lord will keep one out of it because, as Christ said, “Do not be afraid of those who kill the body but cannot kill the soul. Rather, be afraid of the One who can destroy both soul and body in hell” (Mt 10:28). To fear the Lord is to trust him. To trust him is to be kept from the snare.

Breaking Down the Key Parts of Proverbs 29:25

#1 “Fear…”
Fear can be a useful emotion when facing a hungry wild predator in the woods. It can compel you to run away. But most of the time it is unwarranted, and the evil one loves to use it against us, to distract us and make us focus on the wrong things. The fear of the Lord, a right awe and seriousness about our Father in heaven, who loves us, but has wrath for sin because of the perfection of his justice, will drive out fear, as will perfect love (1 Jn 4:18).

#2 “…of man will prove to be a snare,”
Fear of man is one of the worst kinds of fears because it almost always betrays a lack of trust in the Lord. However, it is so common in the kingdom of darkness that it more than anything else moves the fallen world. Man fears man, so he becomes subject to the one he hates and fears. Another man’s fear causes him to oppress the ones he fears. Men and women fear the disapproval of others so much that they compromise everything until they are fragmented shells of what God had made them to be.

#3 “but whoever trusts in the Lord is kept safe.”
What wonderful news this is! It does not say that “the few elites who can trust in the Lord…” It says, whoever trusts in the Lord is kept safe. Anyone can do it. Anyone can break free from the fear of man by simply choosing to trust the Lord. God holds out this promise to all flesh. Safety is the very thing that the fearful desire most, but it is found in the opposite place from where they are looking. True safety is only found in the arms of the Lord.

NIV
Fear of man will prove to be a snare, but whoever trusts in the Lord is kept safe.

NLT
Fearing people is a dangerous trap, but trusting the Lord means safety.

ESV
The fear of man lays a snare, but whoever trusts in the Lord is safe.

KJV
The fear of man bringeth a snare: but whoso putteth his trust in the Lord shall be safe.

NKJV
The fear of man brings a snare, But whoever trusts in the Lord shall be safe. 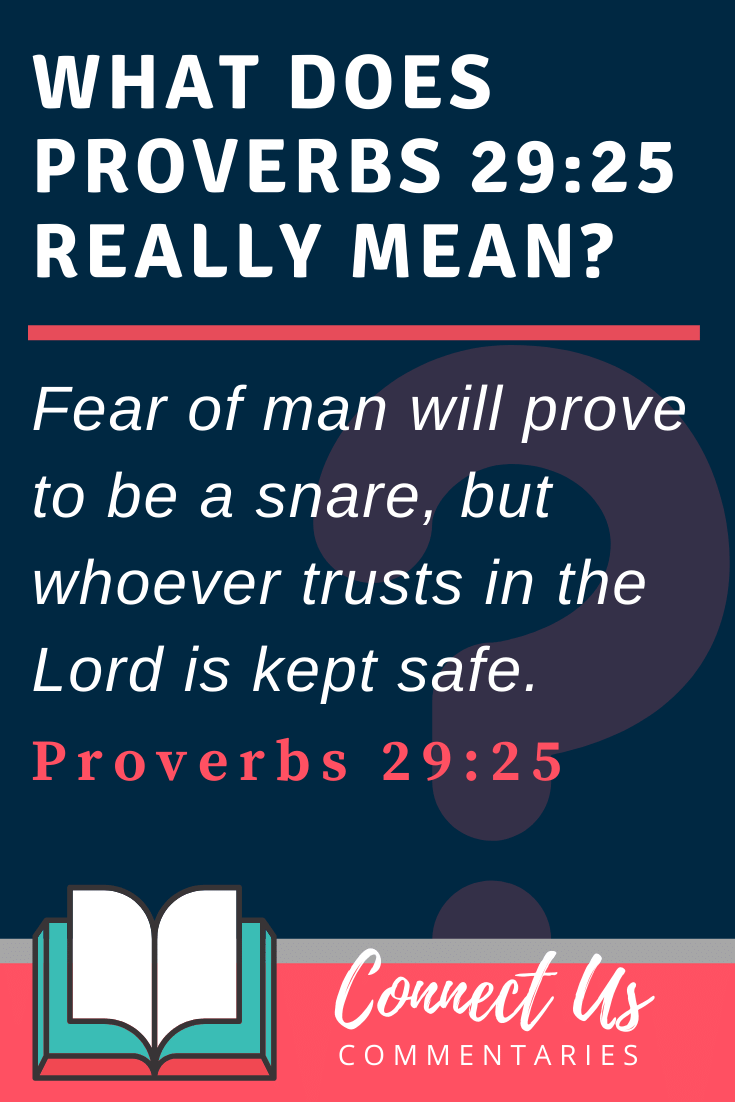