Psalm 30:5
“For his anger lasts only a moment, but his favor lasts a lifetime; weeping may stay for the night, but rejoicing comes in the morning.”

Explanation and Commentary of Psalm 30:5

King David has been brought back from the brink of despair by God who has rescued him. Exactly what was David’s sin or fall in the instance is unclear, but there are many to choose from in his life story in the history books of the Old Testament.

It is clear that God loved David and considered him a “man after his own heart” (Acts 13:22) and that is all the more reason for God to discipline David when he turned from God in his sin. David’s experience of his Father in Heaven is that he is just and merciful and that all of God’s discipline is necessary and helpful for following God and growing up into his likeness.

If you are experiencing God’s discipline and find yourself able to repent, then do it quickly. Or perhaps you are suffering while unaware of any sin on your part. God is merciful. Pray for deliverance, but pray also for your Father to complete whatever refining work he is doing in you through the trial.

Breaking Down the Key Parts of Psalm 30:5

#1 “For his anger lasts only a moment,”
A good father will be only as angry is as necessary to train the child. It is not the uncontrolled human emotion that God is expressing, but righteous indignation at sin and rebellion. God does not desire to stay angry, but to restore right relationship with his children. His anger in this context is expressed in his loving and effective discipline.

#2 “but his favor lasts a lifetime;
Even God’s discipline arises from his favor. David enjoys the faithful promises of God that he will bless his offspring forever. Indeed, his promise to David extends all the way forward to the eternal throne of his Son, Jesus Christ, the King of Kings and Lord of Lords. His favor for us in Christ is just as sure and just as eternal.

#3 “weeping may stay for the night, but rejoicing comes in the morning.”
When you are in the pit of weeping, take heart that your weeping, when it is in proper sorrow for sin, will result in joy when the morning comes. The prophets don’t shy away from telling the truth of God’s judgment for sin, but they are also faithful to tell of God’s promises of restoration for his beloved bride, his Church (Amo 9:14; Hos 6:1; Isa 61:7).

NIV
For his anger lasts only a moment, but his favor lasts a lifetime; weeping may stay for the night, but rejoicing comes in the morning.

NLT
For his anger lasts only a moment, but his favor lasts a lifetime! Weeping may last through the night, but joy comes with the morning.

ESV
For his anger is but for a moment, and his favor is for a lifetime. Weeping may tarry for the night, but joy comes with the morning.

KJV
For his anger endureth but a moment; in his favour is life: weeping may endure for a night, but joy cometh in the morning.

NKJV
For His anger is but for a moment, His favor is for life; Weeping may endure for a night, But joy comes in the morning. 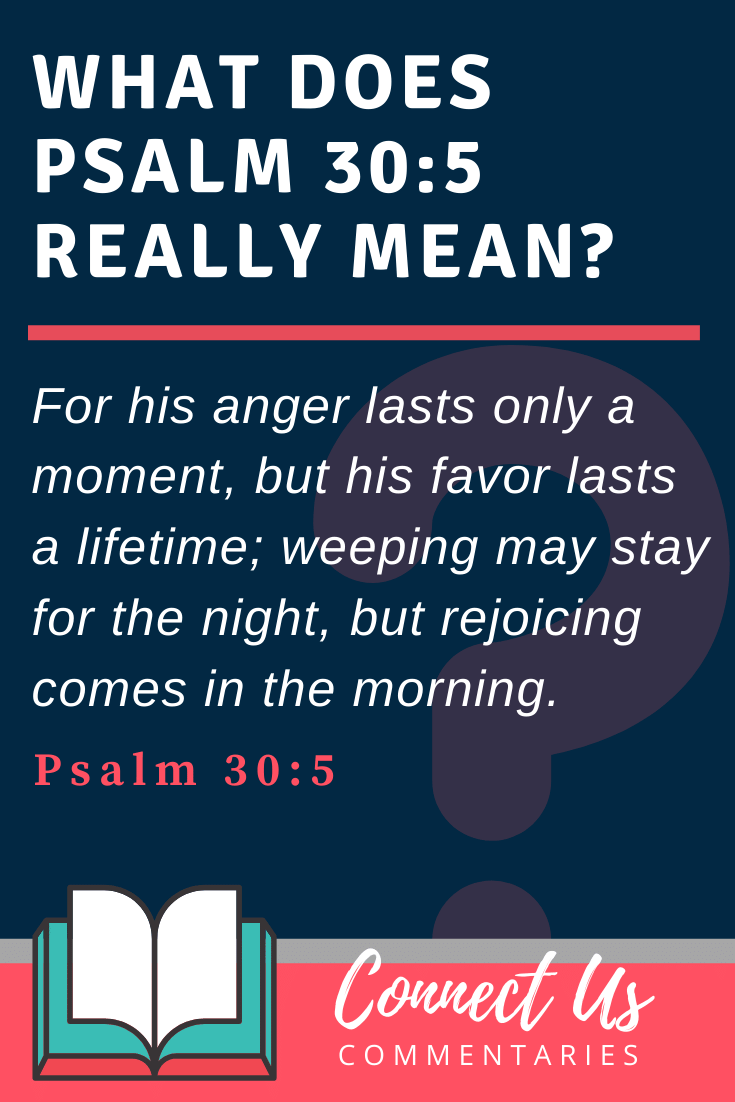