Revelation 3:16
“So, because you are lukewarm-neither hot nor cold-I am about to spit you out of my mouth.”

Explanation and Commentary on Revelation 3:16

This verse says that if you are not fully committed to following God, you are not a Christian and God will reject you.

The verse is part of the first of four visions John the Apostle will reveal in the Book of Revelations. In this vision, John saw the risen Jesus standing among seven burning lights, representing the seven churches in Asia Minor (modern-day Turkey) in the first century: Ephesus, Smyrna, Pergamum, Thyatira, Sardis, Philadelphia, and Laodicea. Jesus tells John to deliver letters to the seven churches to encourage the churches to be faithful.

This verse is part of the seventh letter, delivered to the church in Laodicea, which was the most corrupt. The people of the church in Laodicea were indifferent about whether they became better people or not because they had all they needed and wanted to be fulfilled on earth. Because of the plentiful lives they lived, the Laodiceans did not see or appreciate the importance of the poverty of their spirit.
Jesus warns that He will reject those who are neutral between whether they follow God or a false god, and that there is more hope for an open enemy of God.

Breaking Down the Key Parts of Revelation 3:16

#1 “So, because you are lukewarm…”
Jesus was addressing this message to the church, ministers, and people, telling them that there would be more hope for a heathen than for someone who doesn’t choose whether or not to follow God. He wants people to decide whether they are with God or against God, and says that there is no excuse for being indifferent. If God is real, it is the most excellent thing. If He is not, then believing in Him is vile. We have enough information, and we should care enough for the health of our souls, to decide between the two.

#2 “…neither hot nor cold…”
“Hot” refers to people that follow God. “Cold” refers to those that reject God (atheists).

#3 “…I am about to spit you out of my mouth.”
The use of “lukewarm” and “spit you out” in this verse invokes imagery of lukewarm water turning one’s stomach and provoking vomit. Jesus is saying that lukewarm people make Him sick. By spitting those people out of His mouth, Jesus is rejecting those who do not decide whether to follow Him or reject Him.

NIV
“So, because you are lukewarm—neither hot nor cold—I am about to spit you out of my mouth.”

NLT
“But since you are like lukewarm water, neither hot nor cold, I will spit you out of my mouth!”

ESV
“So, because you are lukewarm, and neither hot nor cold, I will spit you out of my mouth.”

KJV
“So then because thou art lukewarm, and neither cold nor hot, I will spue thee out of my mouth.”

NKJV
“So then, because you are lukewarm, and neither cold nor hot, I will vomit you out of My mouth.” 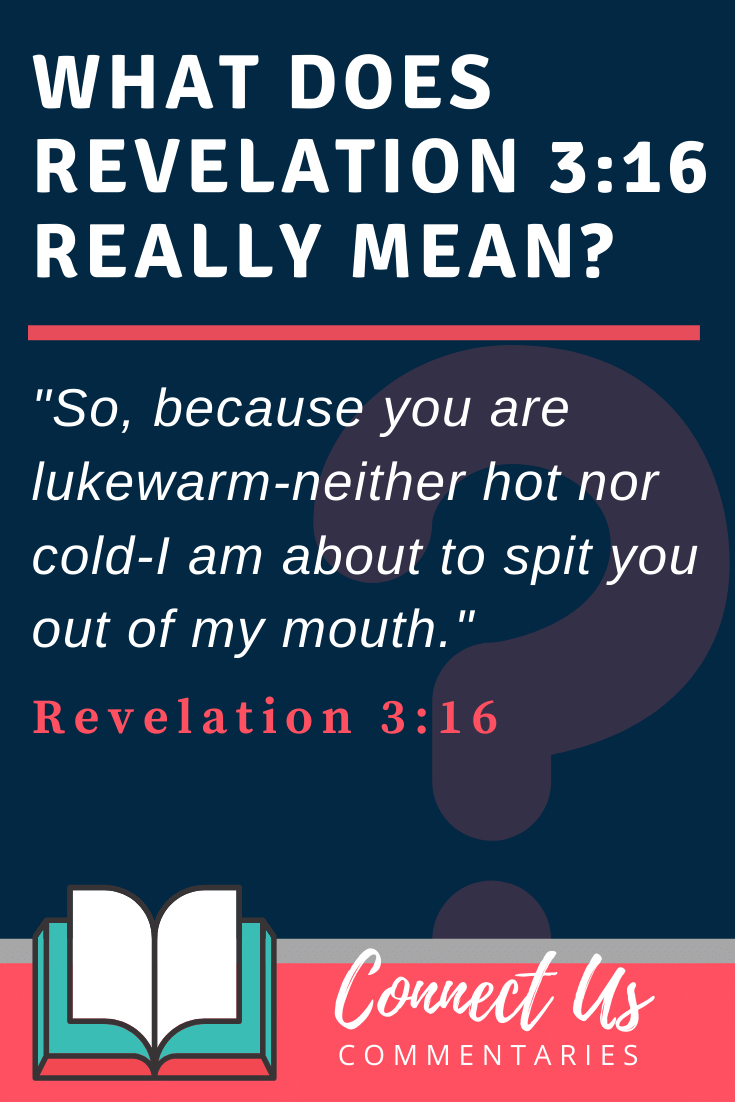