The book of Job is a familiar story to many Christians. Job was a rich and righteous man who was blessed by God with great possessions and a loving family. He sought to please God in all things and lived his life in worship to Him. Then, Satan came to test Job as a way to challenge God; God gave Satan permission to take away everything Job had and to afflict him with illness and injury, although Satan was not permitted to take his life.

Job lost everything – his home, his flocks, and his family – in a matter of minutes. However, his initial reaction was not anger or entitlement. Instead, Job says in Job 1:21, “Naked came I out of my mother’s womb, and naked shall I return thither: the Lord gave, and the Lord hath taken away; blessed be the name of the Lord.”

What does this mean, and how can we adopt this attitude in our own lives?

Contrary to popular opinion, Job is not a person of patience. He was not patiently waiting for God to restore him; he had no reason to expect that from God, and he ultimately never learned the reason why God allowed Satan to test him. Instead, we should see that Job is a story about recognizing that God is sovereign and in total control of the universe, while we have nothing of value to offer Him.

Much of Job’s complaint through the rest of the book and his conversations with his friends revolves around his justness and righteousness. He sought to justify himself before God by claiming that he had not lived a sinful life and therefore did not deserve such a terrible string of punishments. God ends the discussion by answering Job’s supposed entitlement by confronting him with his powerlessness. Job acknowledges that he did not recognize God’s authority and might, and maintains his silence. Only after Job learns this lesson does God restore his livelihood and family to him.

The key to understanding Job is understanding that God’s ways are so much higher than our own. We cannot fathom the mind of God or fully understand His purposes, so we should not complain that God has somehow overlooked us or forgotten us.

How We Respond to God

It is also critical to note that Job never cursed God or blamed Him for the calamity. All of his friends, and even his wife, thought that Job was foolish to maintain his faith even in the direst circumstances. They told him to curse God and accept death because surely that would be better than living in total misery. Even though Job still did not fully understand and appreciate God’s authority, he wisely rebuked them and refused to lay the blame at God’s feet for what had happened.

Job’s response to such terrible loss should be an example for us. When we lose a job, a house, or even a loved one, it can be tempting to blame God or say that God somehow caused these things to happen, but this is never right. God allows sadness to come in, but He never causes it. Remember, He allowed Satan to take everything away, then He allowed Satan to afflict Job’s body. God is always in complete control over us, including the extent to which evil can creep in and affect us – he placed clear limits on how far Satan was allowed to go.

What does this mean as far as the motivations for God’s allowances and limitations on evil? Does He use evil for good? While He never uses evil or even temptation to sin as a tool on His own, He does allow our circumstances to lead us back to Him. He always wants us to seek Him first, and typically our lowest points are when we cry out to God the loudest. The children of Israel strayed from God and He allowed other nations to oppress them; then, when they cried out to Him, He returned to them and delivered them out from their troubles.

Let us be clear, though: this does not mean that trouble in our lives is a sign of God’s punishment. That is a short-sighted vision of the mind and will of God, and that is a trap that Job’s friends repeatedly fell into as they attempted to counsel him. They said that Job was somehow responsible for his troubles due to sin in his life, which was actually not the case. God does not allow pain and loss because He is uncaring or wants us to be harmed; that goes completely against His nature.

For all of his failings at first, Job knew something very important about God: He gives us everything, and He can take everything away. Nothing happens outside of the control and the express will of the Father. We should certainly be quick to recognize God’s provision when blessings come our way and when everything seems to go right – this only happens because God permits it to happen. In the same way, when we do suffer loss or heartbreak, it is also only brought about because God sovereignly orchestrates our circumstances to allow it to happen, and we are commanded to seek Him with equal devotion through the bad times as well as the good.

Through it all, we are commanded to praise the Lord. Job acknowledged God’s hand in what had happened to him and still blessed His Name as it happened. After all of the heartache and loss, when God restored Job, He promised to listen to Job’s prayers on behalf of his friends for their sin in assuming God’s intentions. Job’s faith in God was proven trustworthy, and He continued to rely on God when his fortunes were reversed back to good.

We are certainly permitted to grieve over the bad things in our lives, but we should never think that God is out to hurt us. We should simply recognize that everything is part of God’s plan and is within His power at all times, and praise Him through sun and storm alike. 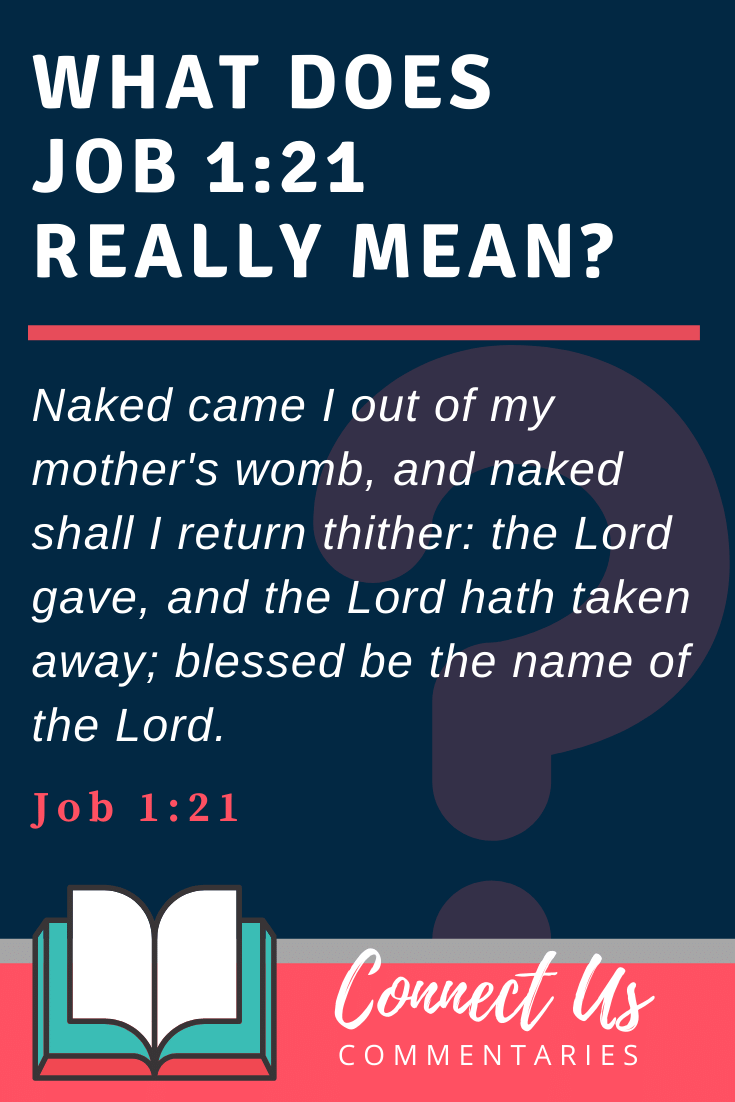