Jesus frequently found Himself at odds with the Pharisees and religious rulers of His time. They often confronted Him about supposed blasphemy and defiance of the Law, and every single time Jesus answered with the true meaning of the Scriptures. The scene in Luke 19:40 is one such confrontation.

This takes place during what is now known as the “triumphal entry” on Palm Sunday. Jesus is going to Jerusalem for the Passover, but He also knows that this journey will culminate in His arrest and death on the cross, the whole reason He came to earth to be God with us. He had ministered across the regions of Galilee, Samaria, and Judea for three years, and had gained a massive following due to His authoritative teachings and miraculous signs.

Many heralded His arrival in Jerusalem as the coming of the promised Messiah and welcomed Him with joyful singing as He rode into town. They laid palm branches down in front of Him as a sign of respect, welcoming Him as a conquering hero and singing praises to God quoted from the Psalms that prophesied the Christ.

However, the Pharisees maintained their opposition to His ministry and the adulation He was receiving from the crowds. They demanded that He rebuke His followers for behaving in this way, but Jesus explained that such praise was necessary and inevitable. He says in Luke 19:40, “And he answered and said unto them, I tell you that, if these should hold their peace, the stones would immediately cry out.”

But how can rocks sing praises to God? They are inanimate objects and have no capacity for recognizing the splendor and majesty of their Creator, right?

For the explanation, we should return to Genesis. When God created the world, He said that it was good. When He made man and woman, He said that His creation was now very good. However, when Adam and Eve sinned, they marred the perfection God had made, and evil and death now cursed the ground and brought a destiny and heritage of destruction upon the whole earth.

Let’s jump ahead to the book of Romans. In chapter 8, Paul references a future glory that all of humanity and all of creation yearns for deep within its spirit. He reiterates this notion that the created world was subjected to pain and death when sin disrupted our original purpose – he even says that the earth did not accept this punishment willingly, but it was subjected to God’s authority in all things. Romans 8:22 says, “For we know that the whole creation groaneth and travaileth in pain together until now.”

The world was not made to die. The perfect Eden that the Father lavishly crafted out of nothingness was not meant to spiral into oblivion. Sin and evil caused mankind to fall away from God, and the earth is going to be destroyed and remade again in the future. As a result, all of creation yearns for that return to God’s first design.

Even so, it was created from the start to be a wordless testimony to the presence and power of God. The first chapter of Romans holds the teaching that God’s splendor and creative power are on full display in the world, consistently preaching God’s existence and authority to us. We are consequently left with no excuse but to recognize God as our Creator and Savior, although many do not. The world itself is evidence for God.

We Cannot Be Silent Before God

We were created to worship God, and all that we see and experience is a living testimony to the fact that God is alive and is actively working in the world. We simply cannot remain silent about it.

After Jesus died and was resurrected, the disciples began publicly teaching in Jerusalem and thousands believed in Jesus as the true Messiah, the fulfillment of everything they had hoped for. The Pharisees continued their obstinate denial of Jesus and arrested Peter and John, forbidding them to teach about Jesus. Peter forcefully challenged their ruling, and promised that they would go on preaching anyway – they were compelled to do so. Paul’s letters to his churches would later pronounce woe and misery upon himself if he was to keep silent about the Gospel.

Old Testament prophets were under a similar burden to proclaim the Word of God. It was said in many places that the spirit of God would descend on people at various times, and they immediately began speaking in tongues and prophesying. Jeremiah said that God’s words were a fire shut up in his bones; if he was to hold in the words that God had burdened him with, it would have totally consumed him in the same way as being burned alive from the inside out.

So Why Did Jesus Say This?

Let’s go back to the statement Jesus makes here. He is not literally saying that the stones on the street will open their mouths and sing hymns. What he is saying is that all of creation was made to exalt and worship the Lord, and if we will not do it with our words, God’s Word is still preached.

The example to follow is that of the early apostles. We should never become complacent or fearful of God’s message, hoarding it to ourselves or remaining quiet for fear of judgment or condemnation. We should be bold in our testimony and faithful in our witness, vocal in our praise and confident in our hope.

When Jesus praised Simon Peter’s acknowledgment of His status as the Son of God, He stated that He would build His church upon the rock of Peter’s faith and that the gates of hell would not stand against it. If we remain faithful to God and publicly proclaim His Name to the world, the rocks will join us in singing, and sin will lose all of its power to oppose the purposes of God. 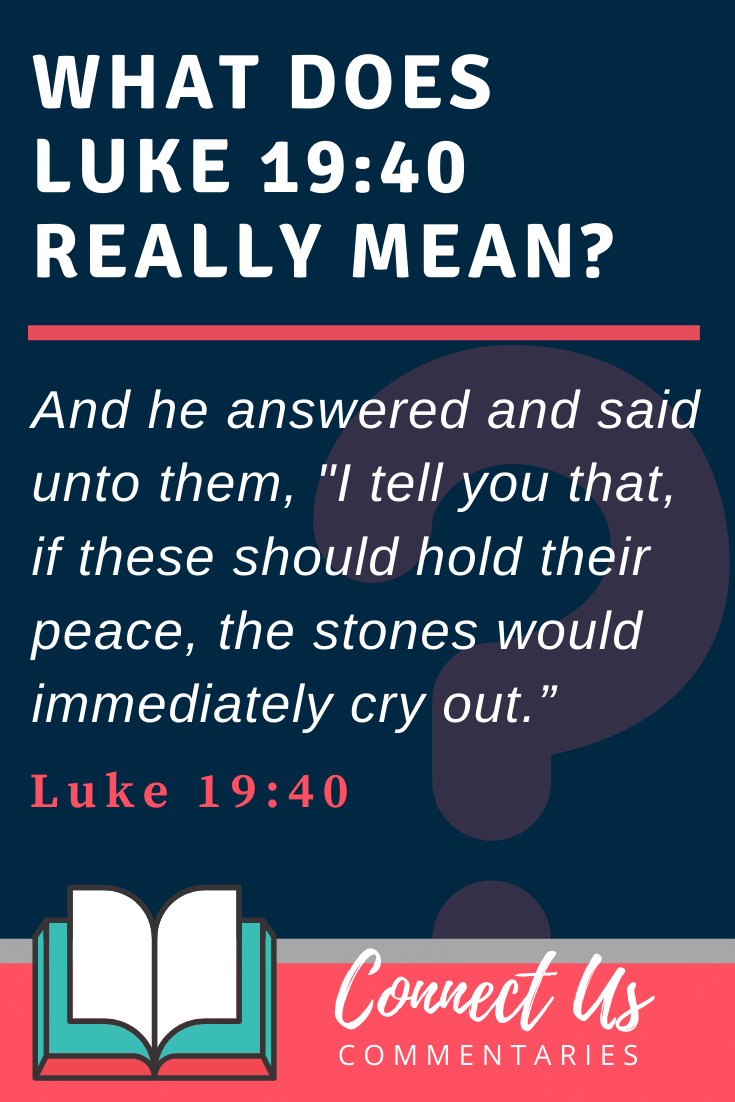