The book of Isaiah can be difficult for modern readers to grasp. It is longer than any other Old Testament book except for Psalms and deals with judgments on a wayward and sinful nation, prophecies about deliverance both immediate and long-term, promises of a coming Messiah, and a host of other challengers for translators and scholars alike.

That being said, Isaiah is rich with language and imagery that has stood the test of time. It is a frequent source of comfort and hope for millions, and many figures of the New Testament returned multiple times to Isaiah to point to Jesus as the promised Messiah and the One Who fulfilled many prophecies about the One God would send to deliver His people. Despite the overall message of judgment and retribution for their sins, the Jews rightly acknowledged Isaiah’s message as one of hope and redemption.

Isaiah 59:19 is one such verse. It says, “So shall they fear the name of the Lord from the west, and his glory from the rising of the sun. When the enemy shall come in like a flood, the Spirit of the Lord shall lift up a standard against him.” This paints a rich picture of God riding in to defend His people against overwhelming odds and unspeakable evil.

Many of Isaiah’s words dealt with the idolatry and sin that had deeply pervaded the fabric of society in Israel. From the heights of devotion and blessing, the people had fallen prey to pride and had abandoned their love for God. They had fractured and often fought civil wars between themselves and also sought protection from other nations invading and oppressing them. Many prophets would warn of God’s coming wrath, but they were drowned out by other false prophets who promised victory and ease to the kings and nobles; God’s ordained messengers were ignored, ridiculed, or beaten and killed for their steadfast devotion to God.

Isaiah himself had a longer period of active prophecy than many, serving four kings of Judah over several decades. His was a fiery message of coming doom if the people did not turn from their wicked ways and return to the God that had saved them and given them the land they now occupied. He pronounced judgments on Israel, as well as the neighboring nations for their apostasy and dissension.

Chapter 59 describes the separation that Israel had created between them and God. God’s power and might were never called into question, but Israel had run so far away and had so vehemently denied God that they had rendered a guilty verdict for themselves that could not be overturned. God had no choice but to bring judgment and disaster upon them.

However, as God saw His people being wiped out with no one to defend them, He has compassion on them and comes to their rescue. God had always promised to rescue them from peril, even if they brought it on themselves. God clothes Himself for battle and rides into the fray, mighty to overturn any force He comes against.

Victory in the Face of Evil

The phrase “when the enemy comes in like a flood” was not much of an exaggeration at the time Isaiah was prophesying. Israel’s military had dwindled to a fraction of its former strength, and civil wars had all but decimated the populace. The northern tribes had already been taken captive by the Assyrians, and all the surrounding nations had their eyes on fragile Judah and the stronghold of Jerusalem. God’s favor had left the people, many of their kings would not turn back to God for help, and His messengers were thrown out of town for speaking ill of the future of the nation.

But God’s power would not be denied. The hordes of enemy troops coming from all sides would soon recognize Who it was that fought for and would save and redeem Israel. It is said in this verse that both those on the east and the west would acknowledge God’s power and sovereignty, meaning that people everywhere would tremble in fear before the Almighty. God will rush in with splendor and might, and His banner (or battle standard set high above the army for identification purposes) would fly high for all to see.

After a cycle of curses and promises, this verse turns the tide in the final chapters of Isaiah as the coming “day of the Lord” is declared. This was nominally understood as the time when the kingdom would be restored, and all oppression would cease. The people would be safe from invaders, they would faithfully turn their whole hearts back to God, and He would establish them in the land and in His heart forevermore.

We can claim the precious promise of this passage, and we too can look forward to the day of the Lord. As Christians, we can also claim the salvation promised by the Messiah of God. Jesus Christ – Whom Isaiah promised as Emmanuel, God with us – came to die on the cross to pay the penalty for our sins, and that payment rushes in to redeem us and wash our sins away. The power of that sacrifice will overwhelm the attacks of Satan and protect us from the flood of evil that surrounds us and tempts us to despair.

By reading to the end of Isaiah, we can be assured that God would restore Israel and bestow His favor upon them again. We too can claim this prophecy as one meant for us: we are all heirs with Christ and co-heirs with the Israelites who acknowledge Jesus as the Christ, and we will reign with the Father in heaven and worship Him forever.

When temptations seem to surround us on every side and threaten to overwhelm us like a flood, we can call to our heavenly Father and trust that He will ride in and raise His banner high above the fray, and will deliver us from evil. 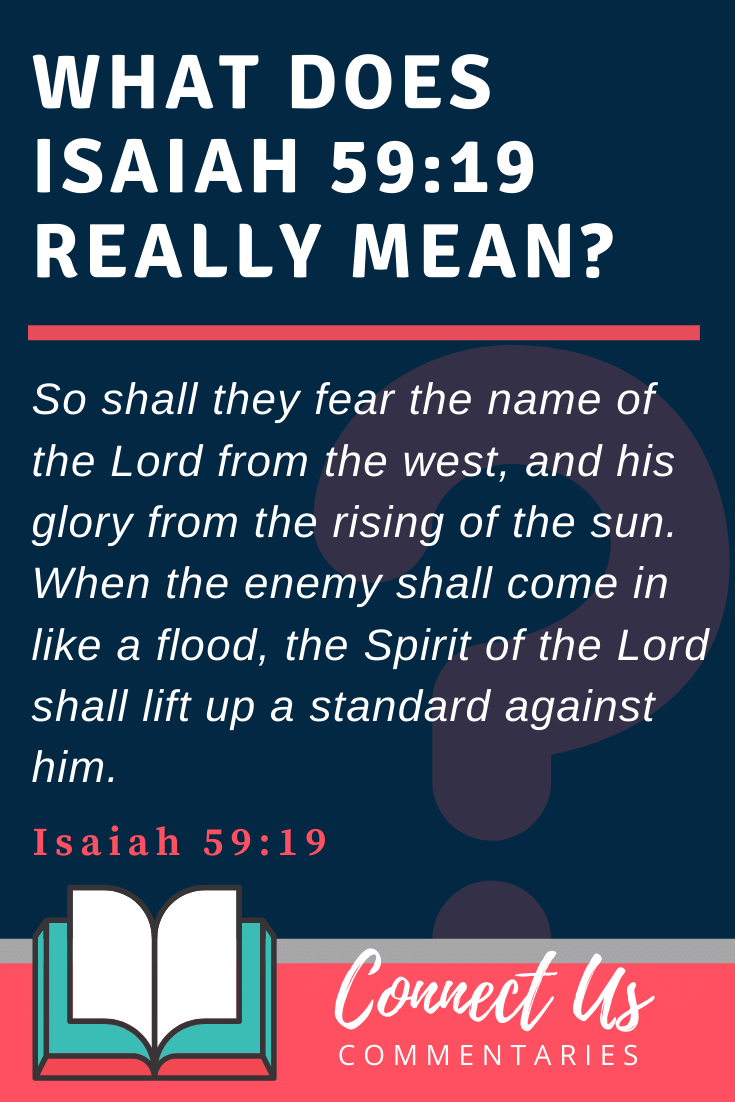