1 Corinthians 15:19
“If only for this life we have hope in Christ, we are of all people most to be pitied.”

Explanation and Commentary on 1 Corinthians 15:19

If Jesus did not actually rise from the dead, then His apostles were in a worse situation than other people.

The apostles and other Christians were charged with living a righteous life in Jesus, giving up many worldly pleasures that others enjoyed and not joining in social rituals that worship false gods. They were frequently prosecuted. In fact, all of the apostles except for John died an unnatural death. Judas hanged himself, James the son of Zebedee was executed by Herod, Paul was beheaded, Peter was crucified (upside down at his request), Andrew was crucified, Thomas was speared to death, Matthew was stabbed to death (though some contend he was not martyred), James was stoned then clubbed, Matthais (chosen to replace Judas) was burned. It is unclear what type of unnatural death Philip, Bartholomew, Simon the Zealot suffered.

There were several mass persecutions of Christians in the 300 years after Jesus’s death, where Christians were covered in stiff wax and set on fire, put in skins of animals and fed to dogs, beheaded, boiled and crucified. They were blamed for natural disasters and killed. They were mocked and killed for the entertainment of the rulers. They were killed because Christianity was spreading across the Roman empire with beliefs contrary to the Roman worship of Roman gods.

Christians today are called to live their lives according to Scripture and stay away from sinful worldly temptations. Some say, at the time of this writing, that Christian persecution is the highest in modern history with 11 Christians killed each day in 50 countries on the “World Watch List” simply because they are Christians.

Breaking Down the Key Parts of 1 Corinthians 15:19

#1: “If only for this life…”
This part of the verse means that if it is true that Jesus was not resurrected, then our faith is empty and there is no immortality. There is no life after death in Heaven with Jesus and there is nothing to look forward to after death.

#2: “…we…”
Many commentators believe that “we” only refers to the apostles. Others think it refers to all who believe in Jesus, not just the apostles, because Paul had not referenced the apostles in the previous verses and the verse is true for all Christians.

#4: “…we are of all people most to be pitied.”
The apostles (or all Christians, depending on the interpretation) lead a sad life because they are in constant danger of persecution and deny themselves worldly pleasures. They do this because they want to be with Jesus in Heaven, but there is nothing after this life.

NIV
If only for this life we have hope in Christ, we are of all people most to be pitied.

NLT
And if our hope in Christ is only for this life, we are more to be pitied than anyone in the world.

ESV
If in Christ we have hope in this life only, we are of all people most to be pitied.

KJV
If in this life only we have hope in Christ, we are of all men most miserable.

NKJV
If in this life only we have hope in Christ, we are of all men the most pitiable. 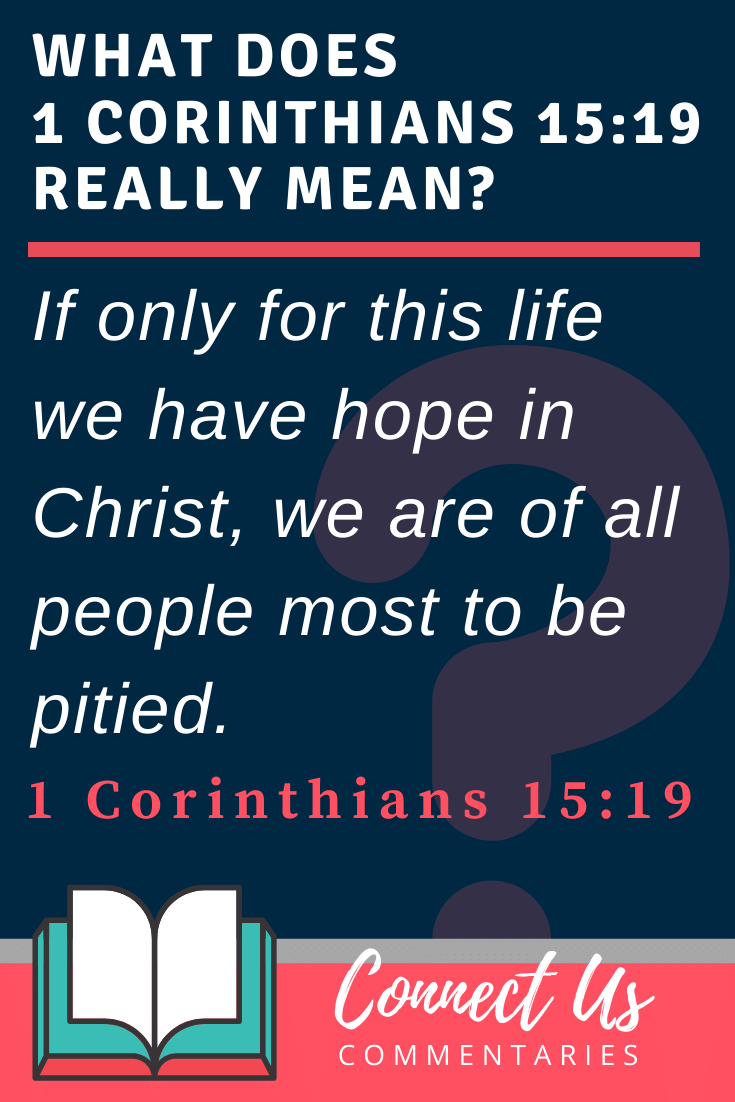