1 Corinthians 15:33
“Do not be misled: ‘Bad company corrupts good character.’”

Explanation and Commentary on 1 Corinthians 15:33

If you let non-Christians shape your thinking, you will conform to the ways of the world instead of the way of God.

The followers of Jesus will be resurrected when Jesus comes again (1 Corinthians 15: 23). Believers would live forever in Heaven in a resurrected body. This resurrected body will not be of flesh and blood as we are now, but will be a much different spiritual body suitable to living in the celestial world (1 Corinthians 15:40-50). Then, all enemies of Christ would be destroyed, death would be abolished, and Jesus would hand the Kingdom over to God the Father.

Paul challenged the Corinthians to look at the absurdity of his own conduct if the resurrection were false. Paul risked persecution daily for being a Christian and spreading the gospel. Christians, in general, were persecuted during and beyond Paul’s lifetime for their beliefs.

Some heathens would encourage the Corinthians to live a sinful life focused on worldly pleasure because they did not believe there was anything after death. Paul told the Corinthians that they should think carefully about what was right, and to stop living sinful lives.

Breaking Down the Key Parts of 1 Corinthians 15:33

#1: “Do not be misled…”
This is translated in the New King James Version as “Be not deceived…” The Corinthians were being influenced by non-Christians who persuaded them to enjoy worldly pleasures because they believed there was no Heaven.

#2: “ ‘Bad company corrupts good character.’”
The New King James Version translates this as “evil communications corrupt good manners.” This has the same meaning as the more modern phrase attributed to Benjamin Franklin’s Poor Richard’s Almanack: “If you lie down with dogs, you get up with fleas.” Here, Paul was quoting a pagan poet/philosopher, Menander, in his play called “Thais.” The entire text of the play does not appear available, but it was about a powerful historical woman named Thais from Athens. The phrase may have been a common phrase at the time of Paul’s writing. Paul uses it to specifically refer to the danger of becoming corrupted by associating with non-Christians.

NIV
Do not be misled: “Bad company corrupts good character.”

NLT
Don’t be fooled by those who say such things, for “bad company corrupts good character.”

ESV
Do not be deceived: “Bad company ruins good morals.”

NKJV
Do not be deceived: “Evil company corrupts good habits.” 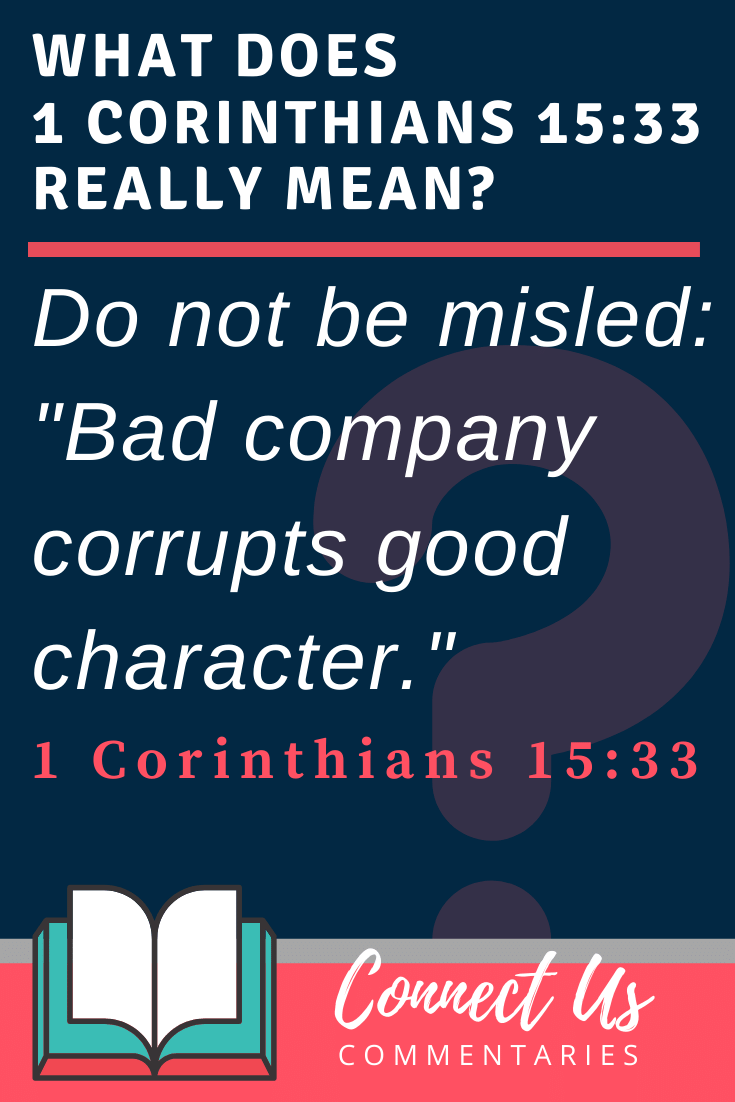