2 Corinthians 10:5
“We demolish arguments and every pretension that sets itself up against the knowledge of God, and we take captive every thought to make it obedient to Christ.”

Explanation and Commentary on 2 Corinthians 10:5

The ministry of the apostles proves false the contradictions against God’s Word and changes the minds of listeners of their ministry to convert them to Christianity.

Paul used the imagery of war in telling the false apostles in the Corinthian church that even though he was a man, he would be using weapons from God to wage war against them (2 Corinthians 10:4). These weapons would not be “carnal.” This means that they would not be of this earth or made by man.

Paul is speaking about spiritual warfare against his enemies, who are people who spread beliefs against God. Some commentators have taken this verse and applied it out of its historical context to use it for individuals in our daily lives. They say that we should use God’s Word as our weapon against our own sinful thoughts, bringing our thoughts back in line with God’s Word through the power of the Holy Spirit. We do this through prayer and reading the Bible (Matthew 4:4).

Breaking Down the Key Parts of 2 Corinthians 10:5

#2: “…demolish arguments…”
Prove that God’s Word is wiser than the philosophies of scholars and the teachings of false prophets that contradict God’s Word.

#3: “…and every pretension…”
And every thought or the supposedly lofty doctrine of mere mortals.

#4: “…that sets itself up against the knowledge of God…”
That contradicts God’s Word.

#5: “…and we take captive every thought…”
All the thoughts, opinions and doctrines of other people that promote a world view – as opposed to a God-centered view – will be controlled and put down. They will be violently overpowered by spiritual weapons from God. They will be conquered with ease. Like captives of war who are led from the conquered region to the victor’s region, the minds of those against God are taken into His spiritual realm.

#6: “…to make it obedient to Christ.”
To make them voluntarily subservient to Jesus. The minds of these people are changed so that their inner thoughts become obedient to Christ. Their minds will no longer conform to the ways of the world and will be renewed so that their principles will reflect God’s will (Romans 12:2). After their principles are changed, their conduct will also change.

NIV
We demolish arguments and every pretension that sets itself up against the knowledge of God, and we take captive every thought to make it obedient to Christ.

NLT
We destroy every proud obstacle that keeps people from knowing God. We capture their rebellious thoughts and teach them to obey Christ.

ESV
We destroy arguments and every lofty opinion raised against the knowledge of God, and take every thought captive to obey Christ.

KJV
Casting down imaginations, and every high thing that exalteth itself against the knowledge of God, and bringing into captivity every thought to the obedience of Christ.

NKJV
Casting down arguments and every high thing that exalts itself against the knowledge of God, bringing every thought into captivity to the obedience of Christ. 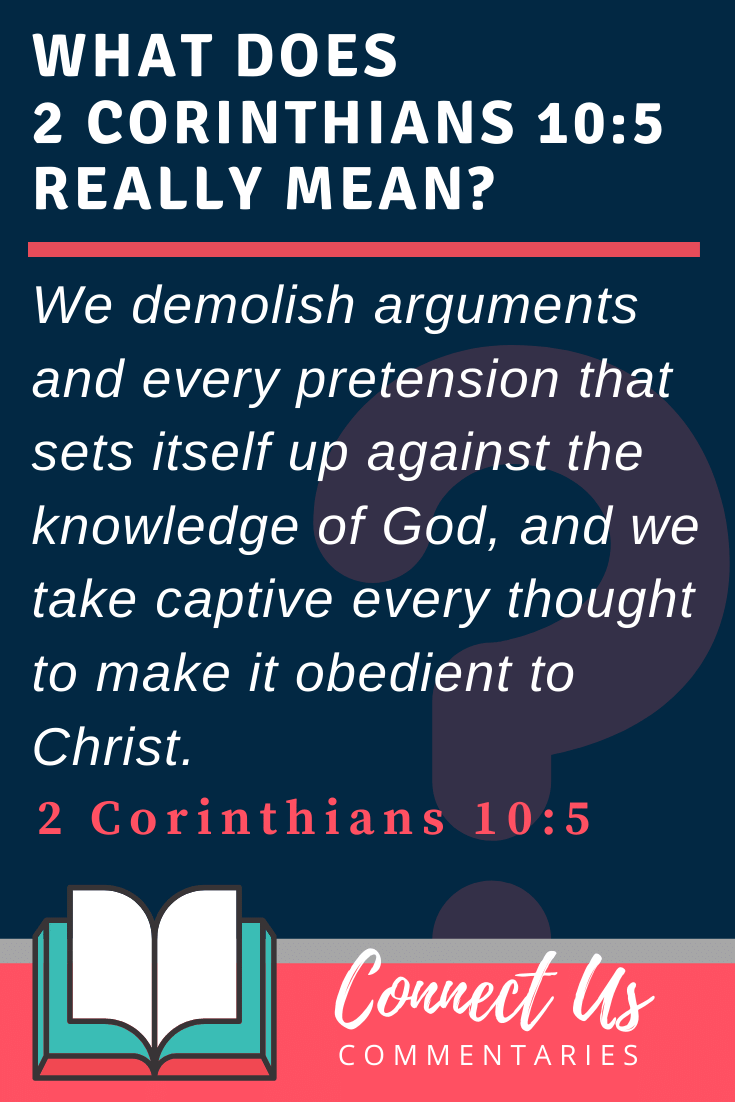