Deuteronomy 23:1
“No one who has been emasculated by crushing or cutting may enter the assembly of the Lord.”

Explanation and Commentary of Deuteronomy 23:1

A large portion of the law of Moses is what is called ceremonial law. Mosaic law consists of ceremonial law, civil law, and moral law. Civil laws dealt in morals but were mostly concerning the governance of the theocracy of Israel. Moral laws were the eternal, immutable laws that any just court today is built on (murder is wrong, stealing is wrong). But ceremonial law was temporary, and the whole thing was intended as an illustration from God about his holiness and perfection.

The world today looks at the ceremonial laws, like the injunction against cross-breeding cattle, or against mixing fabrics in clothing, as a reason to ignore the moral laws of the Bible. This is simply dishonest. The ceremonial law included the sacrificial system for the atonement for sin. The message was that God is holy, and the fallen world is not. He will set apart, or consecrate, or sanctify for himself what belongs to him.

An emasculated person was loved by God, but in the age of the ceremonial law, when God used the law to teach the differences to his people and the watching world between clean and unclean, perfect and imperfect, holy and profane, the one who was thus imperfect could not be let in, though provision was always made for the outcast, even in the Old Testament. The glorious Good News is that Jesus came to fulfill the ceremonial law and has put an end to the practices which God intended to be temporary. Even a crushed or emasculated person is made clean and holy by the blood of Jesus if they turn to him in repentance for everlasting life.

Breaking Down the Key Parts of Deuteronomy 23:1

#1 “No one who has been emasculated by crushing or cutting…”
Whether by personal injury or self-mutilation, a blemish of this magnitude to one’s members constituted a ritual uncleanness that could not be washed off or expiated. This is a breach of ceremonial, rather than moral law and was used to teach the concept of holiness to God’s people before the age when Christ had fulfilled the ceremonial law once and for all.

#2 “…may enter the assembly of the Lord.”
Part of the reason for this rule could have been to prevent the kings of Israel and Judah from making eunuchs of their servants. To offset the shame and exclusion that would have been felt by them, refer to Isaiah 56:3-5, “Let not the foreigner who has joined himself to the LORD say, ‘The LORD will surely separate me from His people.’ Nor let the eunuch say, ‘Behold, I am a dry tree.’ For thus says the LORD, ‘To the eunuchs who keep My sabbaths, and choose what pleases Me, and hold fast My covenant, to them I will give in My house and within My walls a memorial, and a name better than that of sons and daughters; I will give them an everlasting name which will not be cut off.’”

NIV
No one who has been emasculated by crushing or cutting may enter the assembly of the Lord.

NLT
If a man’s testicles are crushed or his penis is cut off, he may not be admitted to the assembly of the Lord.

ESV
No one whose testicles are crushed or whose male organ is cut off shall enter the assembly of the Lord.

KJV
He that is wounded in the stones, or hath his privy member cut off, shall not enter into the congregation of the Lord.

NKJV
He who is emasculated by crushing or mutilation shall not enter the assembly of the Lord. 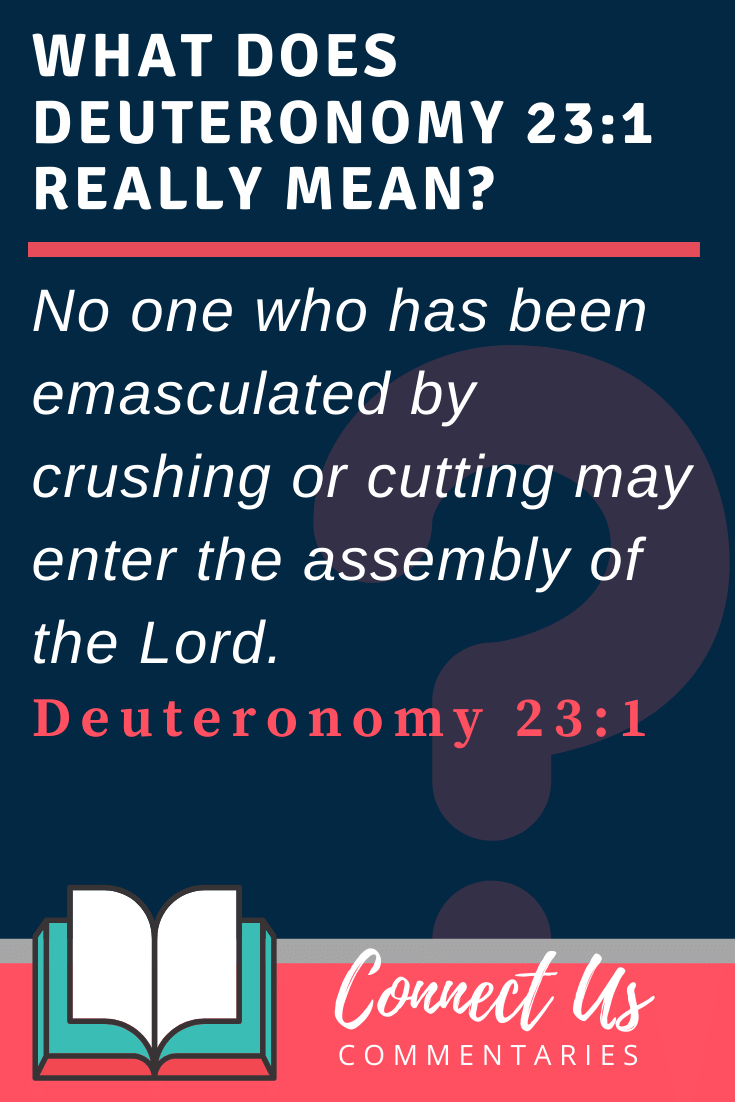