Ecclesiastes 4:12
“Though one may be overpowered, two can defend themselves. A cord of three strands is not quickly broken.”

Explanation and Commentary of Ecclesiastes 4:12

This particular verse seems to be about mostly exactly what it is says at face value. The author had said that all was vanity for a man who is alone and toils for nothing, with no one else in his life. Then he extols the virtues of having a partner. This verse describes one of them. Practically, to be alone in life is always a more precarious proposition than having friends. People who travel alone are much more vulnerable.

God has designed humans to be social. He is community in and of himself, and we are most in his image when we are in community with others, sharing God’s love and supporting one another.

The verse is sometimes preached at weddings and could be interpreted as pertaining to marriage. A man who finds a wife finds a good thing (Pr 18:22). A couple may be said to be a more complete picture of the Triune God than an individual, and the third strand could be the Holy Spirit who has bound them together in oneness. Any two-person relationship should include the Holy Spirit, making it a Christ-centered relationship. How much more should marriage be centered on Christ?

Breaking Down the Key Parts of Ecclesiastes 4:12

#1 “Though one may be overpowered,”
When Cain heard that his punishment was to wander the face of the earth alone, he cried that it was too much to bear (Gen 4:13). God took pity and let him go to a city. We are made to be individuals who lend ourselves to the community in service to and relationship with others. Being alone is not the ideal state.

#2 “two can defend themselves.”
However, it has been said that he who fears being alone should beware of community, and he who fears community should beware of being alone (Dietrich Bonhoeffer in Life Together). There is a time to be alone so that the quality of our togetherness will be greater. Once together in Christ, two are better than one. The Christ in a person is often more reliable for his brother than is the Christ in his brother. This is why we must “speak the truth in love” (Eph 4:15) to one another.

#3 “A cord of three strands is not quickly broken.”
This is obvious. But for the three strands to make a cord, they must intertwine appropriately. Three cords unraveled are as easy to break as one. Three friends in unity are a powerful force. Two or more friends bound by the Spirit and the truth are a godly combination.

NIV
Though one may be overpowered, two can defend themselves. A cord of three strands is not quickly broken.

NLT
A person standing alone can be attacked and defeated, but two can stand back-to-back and conquer. Three are even better, for a triple-braided cord is not easily broken.

ESV
And though a man might prevail against one who is alone, two will withstand him—a threefold cord is not quickly broken.

KJV
And if one prevail against him, two shall withstand him; and a threefold cord is not quickly broken.

NKJV
Though one may be overpowered by another, two can withstand him. And a threefold cord is not quickly broken. 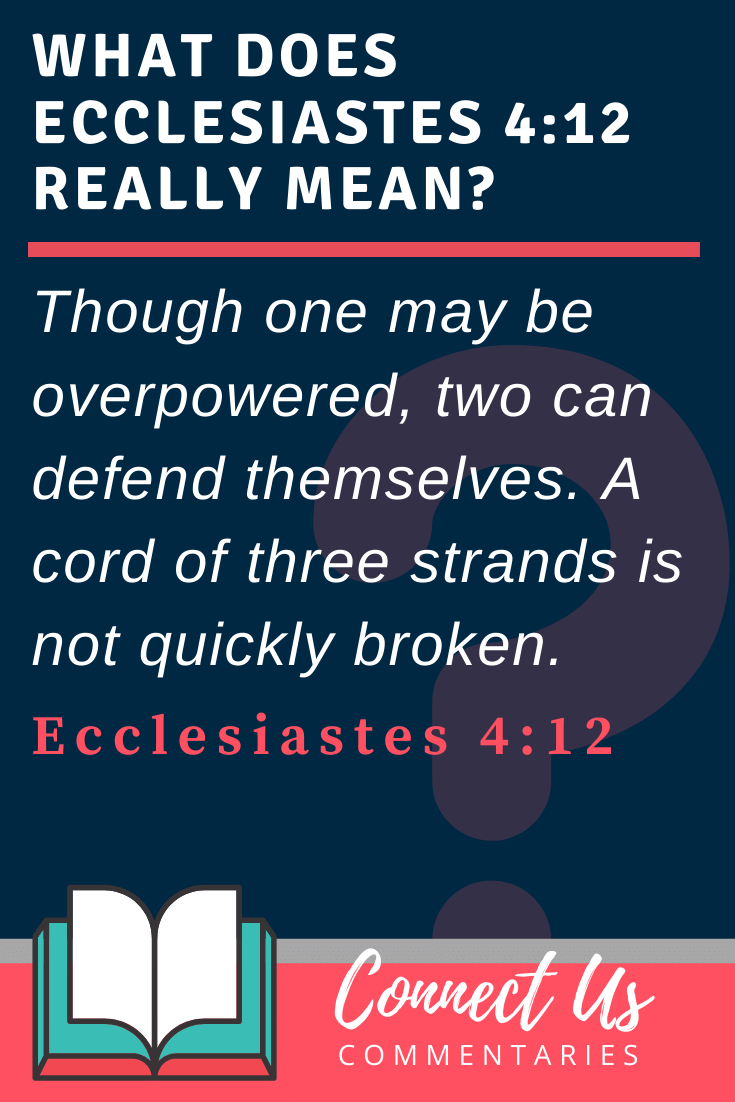