Ephesians 6:12
“For our struggle is not against flesh and blood, but against the rulers, against the authorities, against the powers of this dark world and the spiritual forces of evil in the heavenly realms.”

Explanation and Commentary of Ephesians 6:12

Our struggle will always seem to be against flesh and blood. Isn’t it people who get in our way? Isn’t it even ourselves that are our own worst enemy? Maybe sometimes there is some truth to that, but the ultimate reality is that we are in a spiritual battle that can only be fought with spiritual weapons.

For a time, satan has a measure of authority to cause harm. Just as the Nazis were actually defeated on D-Day, but continued killing and causing trouble until V-Day, satan, a defeated enemy (Col 2:15) is not yet fully routed. Jesus has left the Church to continue to plunder his house until the end of the age.

While it is unhealthy to become obsessed with satan and demons, it is fruitless to deny their existence. But the very weakest of Christians have enough of the power of God and the authority over every demon of hell and should not be afraid. The evil one, actually powerless against the church (Mt 16:18) has one main weapon that he uses most effectively: the power of lies to deceive.

Breaking Down the Key Parts of Ephesians 6:12

#2 “…our struggle…”
Certainly Paul is speaking of the persecution of the Church and especially its ministers such as himself. But our struggle includes anything that we would consider a trial: our sin, particularly pride, hatred, greed or lust, or the ungodly ways of the world, misdealings with other people, and physical ailments and death.

#4 “but against the rulers, against the authorities, against the powers of this dark world and against the spiritual forces of evil in the heavenly realms.”
Rather, all darkness and struggle have one source, Satan and his mysterious hierarchy of demonic principalities who have been given the chance to cause trouble in this present darkness. Even death himself falls into this category. The “dark world” has been violently imposed upon by the birth, and then especially the death and resurrection of Christ. It will finally be snuffed out by the second coming of Christ and the final judgment. Because our battle is a spiritual one, the spiritual weapons of prayer, godliness, and the truth revealed by the Holy Spirit and the Word of God are our defense against it.

The exceptional video below gives a full commentary and explanation of Ephesians 6:12.

Tony Evans explains in just two minutes how to put on the armor of God.

NLT
For we are not fighting against flesh-and-blood enemies, but against evil rulers and authorities of the unseen world, against mighty powers in this dark world, and against evil spirits in the heavenly places.

KJV
For we wrestle not against flesh and blood, but against principalities, against powers, against the rulers of the darkness of this world, against spiritual wickedness in high places.

NKJV
For we do not wrestle against flesh and blood, but against principalities, against powers, against the rulers of the darkness of this age, against spiritual hosts of wickedness in the heavenly places. 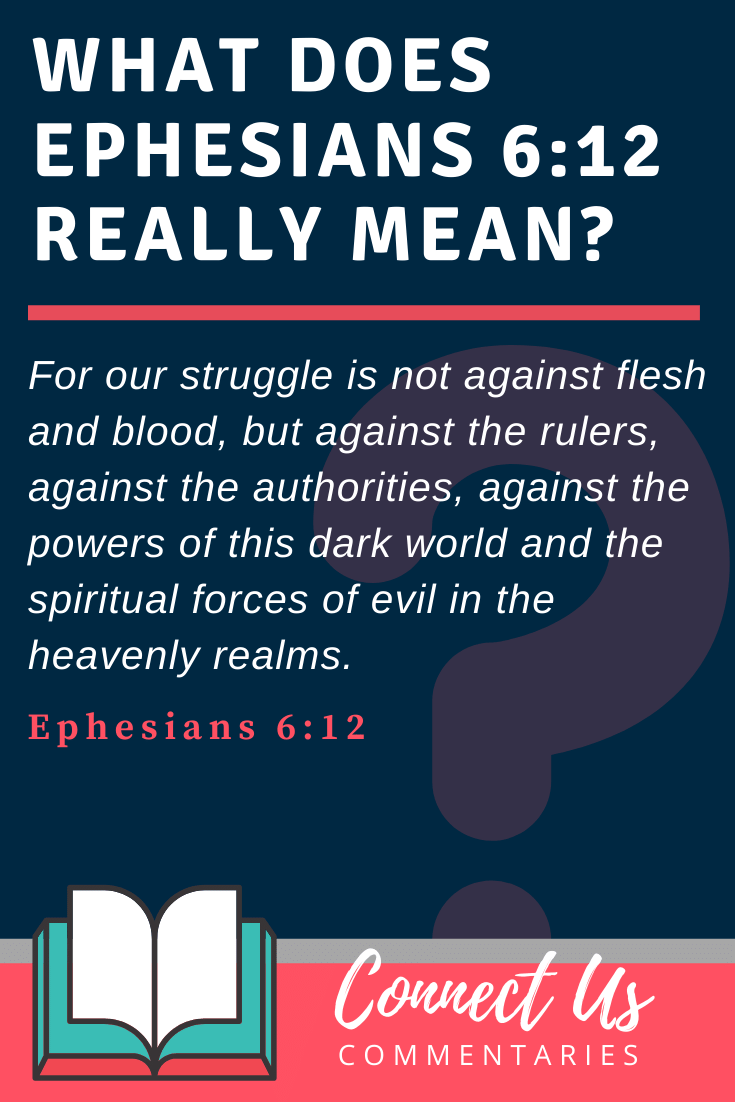