Ezekiel 23:20
“There she lusted after her lovers, whose genitals were like those of donkeys and whose emission was like that of horses.”

Explanation and Bible Commentary of Ezekiel 23:20

Jerusalem is portrayed in the prophetic image as one of two sisters, Oholibah, the other being Oholah, Samaria. In the Bible, these two were depicted as betrothed to God and unfaithful to him. A common theme in the Old Testament is the faithless desire of God’s bride to return to Egypt where they were enslaved and where God had warned them never to return under any circumstance.

The lewd image here is meant to be striking and to promote disgust at the lust of the Jews after the ways of their slavery in Egypt, as though Egypt had been the abusive lover of her adulterous youth. God’s judgment is that Egypt, “her lovers,” along with Assyria and Babylon, will turn against her. She will turn to them for support, and they will crush and oppress her as part of God’s judgment for their rebellion against him.

Breaking Down the Key Parts of Ezekiel 23:20

#1 “There…”
God is specifically referring to Egypt when Israel was enslaved there.

#2 “…she lusted after her lovers,”
The Israelites bore some of the responsibility for their enslavement in Egypt and appropriated that culture a little too readily even while they were slaves.

#3 “whose genitals were like those of donkeys and whose emission was like that of horses.”
Meant to illustrate their great earthly power, it also is meant to be a disgusting image of adultery against God. The lewd imagery was chosen for a reason. God is like a jealous husband and our forsaking of him or idols is as disgraceful and gross as this image portrays.

Expert Overview of Ezekiel 1-33 from the Bible

NIV
There she lusted after her lovers, whose genitals were like those of donkeys and whose emission was like that of horses.

NLT
She lusted after lovers with genitals as large as a donkey’s and emissions like those of a horse.

ESV
And lusted after her lovers there, whose members were like those of donkeys, and whose issue was like that of horses.

KJV
For she doted upon their paramours, whose flesh is as the flesh of asses, and whose issue is like the issue of horses.

NKJV
For she lusted for her paramours, Whose flesh is like the flesh of donkeys, And whose issue is like the issue of horses. 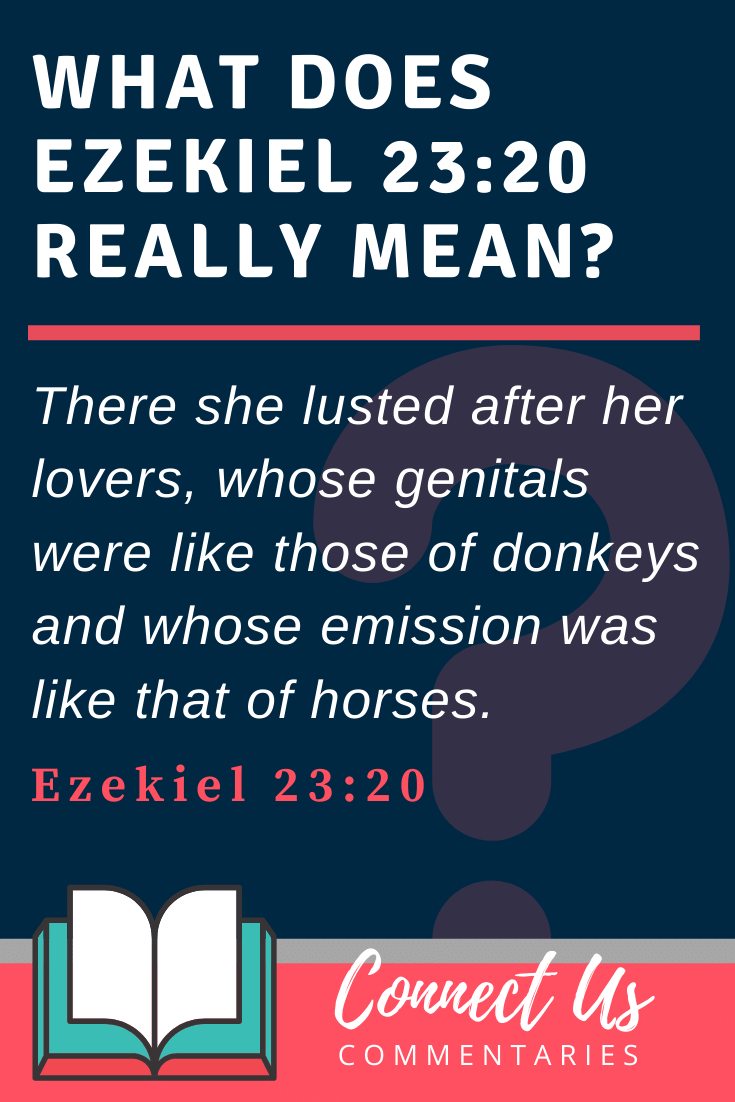