John 7:24
“Stop judging by mere appearances, but instead judge correctly.”

Explanation and Commentary of John 7:24

The religious Jews who were self-righteous would not look past the external to see the reality of what was happening in and around Jesus. “The Lord does not look at the things people look at. People look at the outward appearance, but the Lord looks at the heart” (1 Sam 16:7).

Jesus rebuked them because they were unable to make the connection between doing God’s work of circumcision on the Sabbath and healing a whole body or whole person on the Sabbath. They loved the letter of the law but did not understand the spirit of the law. Men love to focus on appearances because they can feel they are righteous without having to let God into their hearts, where sin dwells and would be painful and toilsome to deal with.

Jesus’ life and words were a threat to their way of life. They loved their way of life and understanding of the world more than they loved God. It was all too easy for them to find reasons to dismiss Jesus so that they could dismiss what he said.

Breaking Down the Key Parts of John 7:24

#1 “Stop judging…”
Christians have always debated the definition of judging. It is true that we are not supposed to judge others, lest we be judged (Mt 7:1). That kind of judgment or judgmentalism is a way to play God, making yourself an idol and hating others for what you are judging in them.

#2 “…by mere appearances,”
Judging by appearance only is one form of judgmentalism. It is the sin of making assumptions about the whole from what the outside looks like, especially in the case of the Jews who rejected Christ and were being dishonest in their judgment. Not so deep down they understood what it would cost them if Jesus was the Messiah, and they lied to themselves by focusing on external things and the letter of the law as they had interpreted it.

#3 “but instead judge correctly.”
Jesus’ use of the word here shows that all judgments are not bad. Some prefer the term discern to delineate between what we are supposed to do, wisely and honestly evaluate without hating or doing God’s job of condemning, and the other kind that we are admonished to avoid. It takes a kind of judgment to put your faith in Christ. You see him. You judge for yourself whether you think he is who he says he is, and you act accordingly. This is what Jesus is hoping for when he tells them, “Judge correctly.”

NIV
“Stop judging by mere appearances, but instead judge correctly.”

NLT
“Look beneath the surface so you can judge correctly.”

ESV
“Do not judge by appearances, but judge with right judgment.”

KJV
“Judge not according to the appearance, but judge righteous judgment.”

NKJV
“Do not judge according to appearance, but judge with righteous judgment.” 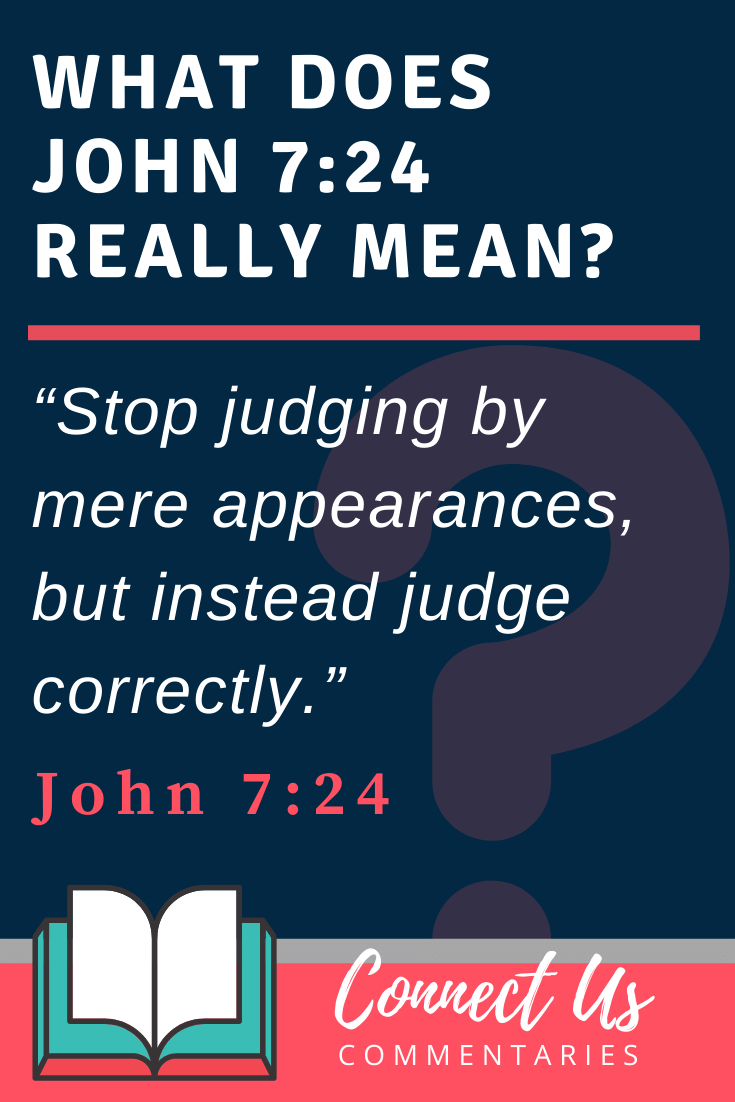