Ezekiel can be a daunting book to read through. It contains many prophecies, oracles, and imagery that has puzzled theologians for centuries. The subject matter is difficult, and the time period in which his ministry took place was a dangerous chapter in the nation’s history. The people had just been invaded by Babylon, and they had been deported into exile along with their rulers.

The prophet Ezekiel was clear that the sins of the people were the reason for God’s judgment and punishments, and that intercession was not possible. He says in Ezekiel 22:30, “And I sought for a man among them, that should make up the hedge, and stand in the gap before me for the land, that I should not destroy it: but I found none.”

What Does This Phrase Mean?

Standing in the gap creates a clear visual picture of someone interceding to protect someone. An obvious application is the protective wall surrounding a city: if there was a breach in the wall, enemies could enter and attack the people, but troops that stood in the gap would be able to protect the opening and repel the invaders. This provides a failsafe against harm when the primary defenses are breached.

In the verses preceding, God is condemning the Israelites for their sins. Verses 23-29 list the offenses they have made: they had defiled the articles of the Temple and disregarded the Sabbath, their rulers had grown wealthy at the expense of the poor, they had extorted and robbed foreigners and oppressed the needy, and their false prophets had placated them with misleading messages of hope and forgiveness.

In verse 30 above, God is said to have sought someone to intercede on behalf of the people – to “stand in the gap” and be an advocate for them – but He could not find someone, so He finishes his proclamation by delivering a verdict of guilt and a promise of wrath.

Examples of Prior Advocates

The notion of a human being interceding on behalf of the people is not uncommon. There are several notable examples from before this point in Israel’s history where a righteous person “stood in the gap” before God.

When the Hebrews made their golden calf idols at Mount Sinai, Moses descended the mountain and condemned them for their unfaithfulness. When He returned to the top of the mountain into God’s presence, God told Moses that He was ready to wipe out the entire Hebrew people and wanted to restart their nation with Moses as the father. Moses interceded on behalf of the Israelites and pleaded with God not to wipe them out. God listened to Moses and did not follow through on His plans.

When David sinned by taking a prideful census, God sent an angel of death across the countryside to punish the people, but when the angel was just outside of Jerusalem he stopped. David purchased the threshing floor that was there, built an altar, and offered sacrifices as a way to beg God’s mercy and forgiveness so that the people would be spared. God accepted David’s offering, and the angel left them. David’s intercession stood in the gap for the people, and David commemorated that moment by dedicating that site to the construction of the Temple of God that his son Solomon would ultimately build.

The Gap of Atonement

The most important example of standing in the gap before God comes in the life of Jesus Christ. His very purpose for being born as a human being was to give His life as an atoning sacrifice for the sins of the entire human race. This was the ultimate act of standing in the gap before God’s judgment. Our sin left us vulnerable to divine punishment, but Jesus willingly offered His life as the only acceptable payment for that sin. He stood in the gap by hanging on a cross and dying for us.

This is the wonderful story of the Gospel: while we were caught in our sinful human nature – when our defenses were obliterated and divine justice was sure to sweep us away – the blood of Jesus stands in the gap to protect and restore us to God. His sacrifice continually offers the only path to restoration before God, and Jesus Himself stands before the throne of the Father advocating on our behalf and vouching for all believers.

How Can We Stand in the Gap for Others?

In order to stand in the gap before God on behalf of others, we must first accept Jesus’ sacrifice as the atonement for our own lives. This is the first and most important step: recognizing that we are powerless to stem the tide of judgment and acknowledging that we need a greater Savior than we could ever be for ourselves.

The next step is to follow the example of Christ and stand in the gap for others. We can begin by teaching them about the Gospel, then lovingly but directly confronting the sins in their lives and pointing them back to God.

However, the best way we can stand in the gap is through prayer. Intercessory prayer is nothing more than speaking to God on someone’s behalf, and this is the best and most effective way we can follow Jesus in standing on behalf of others and advocating for them before God. 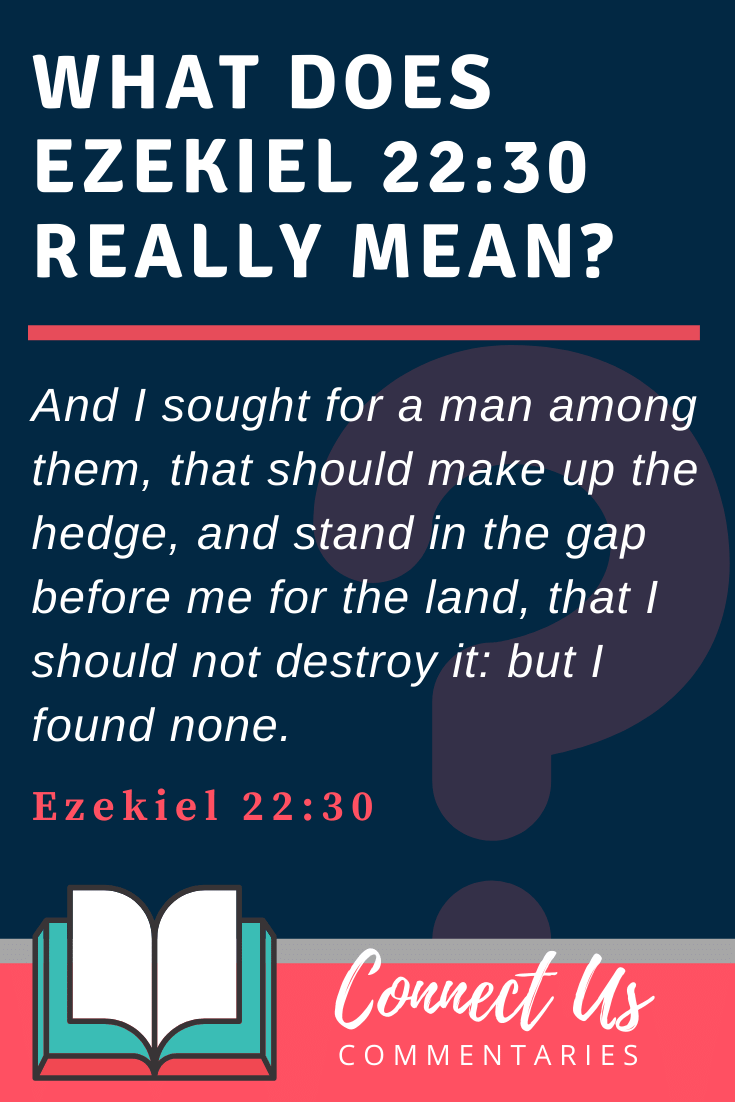