Proverbs 18:21
“The tongue has the power of life and death, and those who love it will eat its fruit.”

Explanation and Commentary of Proverbs 18:21

Words have great power to bless and to curse. Jesus said that a man is not made unclean by what goes into his mouth, but by what comes out of it (Mt 15:11). James says whoever can control his tongue could be perfect in every way (3:2).

According to this proverb, one should take care to watch his or her words carefully, and be slow to speak. Understand the power of speech. There is life and death in words.  If you love to talk, you will eat the fruit of your words.  Perhaps you know the phrase, “He will be eating his words.”  Words can condemn us.  This is why when you’re arrested you have the right to remain silent, and when you are on trial you have the right to plead the fifth amendment.

If you have a habit of losing control of your tongue, whether it is to curse, gossip, brag, lie, or anything else unseemly, ask the Lord to help you be silent. You will eat the fruit of your tongue, bitter or sweet.

Breaking Down the Key Parts of Proverbs 18:21

#1 “The tongue…”
As a muscle, the tongue isn’t as capable of producing force as a leg or even the jaw, but its power is measured by the damage it can do and the life it can bring. In any translation, the tongue is mentioned well over a hundred times in the Bible. We should take great care with the words we produce.

#2 “…has the power of life and death,”
One way that Jesus is revealed is as the Word made flesh. Words themselves are powerful. God spoke the world into being, and he spoke death and judgment in the fall. As his image-bearers, humans also have power in their words. It takes words to bless someone, a powerful and life-giving act, and it takes words to curse someone, bringing death. Other ways an unbridled tongue can be damaging are through lies, gossip, profanity, and venting anger.

#3 “and those who love it will eat of its fruit.”
This could be seen as those who enjoy talking a lot.  It could also refer to those who respect the power of the tongue.  But the former is more likely because even those who do not respect the power of the tongue will eat the bitter fruit produced by talking. Long before one’s character has developed for the better, a person can avoid a world of trouble by minding his tongue, difficult though this may be (Pr 21:23).

Expert 8 Minute Overview of the Book of Proverbs

NIV
The tongue has the power of life and death, and those who love it will eat its fruit.

NLT
The tongue can bring death or life; those who love to talk will reap the consequences.

ESV
Death and life are in the power of the tongue, and those who love it will eat its fruits.

KJV
Death and life are in the power of the tongue: and they that love it shall eat the fruit thereof.

NKJV
Death and life are in the power of the tongue, And those who love it will eat its fruit. 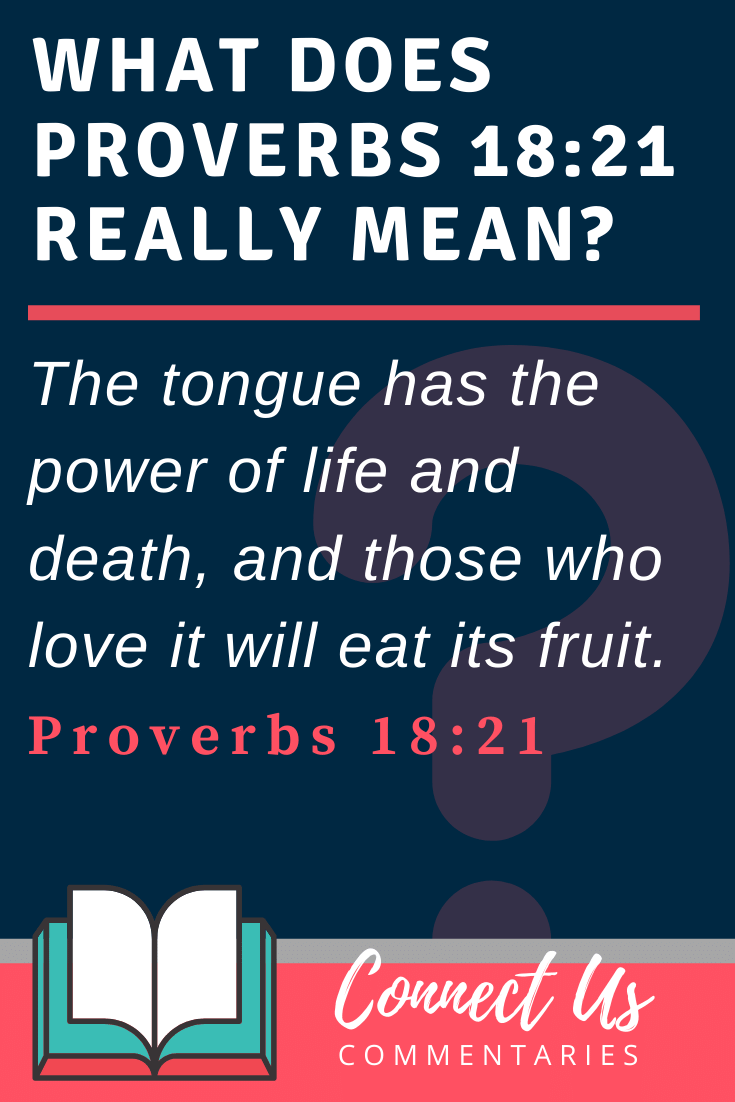