Proverbs 31:8-9
“Speak up for those who cannot speak for themselves, for the rights of all who are destitute. Speak up and judge fairly; defend the rights of the poor and needy.”

Explanation and Commentary on Proverbs 31:8-9

Proverbs 31:1-9 addresses an earthly king, Lemuel, in the voice of his father. Because of our sin nature, power and wealth tend to be corrupting influences. Earlier verses addressed the tendency of kings to overindulge in sex through the collecting of harems and thus being destroyed. This was certainly a problem among the Israelite kings (1 Kg 11:1-6).

The verses also address the problem of drinking too much, the problem being that drunkenness will cause the king to forget to provide justice to the poor and oppressed. He reserves strong drink for those who are painfully on their deathbed.

Verses 8 and 9 show that God intends for people in power to be a voice for the voiceless. This is no easy task because intention does not equal wisdom. It takes having the heart of God and the Spirit of God to know how to “defend the rights of the poor and needy.” There are those who claim to defend the poor and play on emotionalism to get money from those with guilty consciences. Problems are invented to justify social programs, while often the true issues go unanswered and ignored because they require true wisdom and true sacrifice.

Breaking Down the Key Parts of Proverbs 31:8-9

#1 “Speak up…”
In this day and age of polarized politics, it is very difficult for anyone to “speak up.” God entrusts us, whether or not we are a king, to say what needs to be said. The Church is especially accountable to God to speak to power when there is oppression and injustice. Today, people in power and the Church herself are confused. Few speak up for actual injustice, while many speak up for made-up causes of the politically correct, and social justice warriors. But God calls us to have courage, stand up, and speak up.

#3 “for the rights of all who are destitute.”
While it should not be ignored that some, especially today, who are destitute have become that way by their own choices, they still have rights. They are still image-bearers of God and have intrinsic value to him. If their rights are being violated they will not have the ability to defend themselves and should be defended by the able as we see Christ in the poor brother or sister (Mt 25:40).

#4 “Speak up and judge fairly: defend the rights of the poor and needy.”
This is largely a restatement. The king is put in place to be the king for all his subjects. His policies should spring from righteousness itself. We are called to defend the poor and destitute not because we feel sorry for them, or because some fundraiser made led us to weep, but because we are called to be righteous. When we walk with God and have turned our lives over to him, he will move us to accomplish his purposes. He will give us the wisdom to help the poor in ways that do not harm them and keep them poor, which is often what happens in societies who mean well, but throw money at problems without wisdom and the big picture in mind.

Hit the play button below for a simple explanation of Proverbs 31:8-9.

Here is a great 8-minute video that will make you an expert on the book of Proverbs.

NIV
Speak up for those who cannot speak for themselves, for the rights of all who are destitute. Speak up and judge fairly; defend the rights of the poor and needy.

NLT
Speak up for those who cannot speak for themselves; ensure justice for those being crushed. Yes, speak up for the poor and helpless, and see that they get justice. 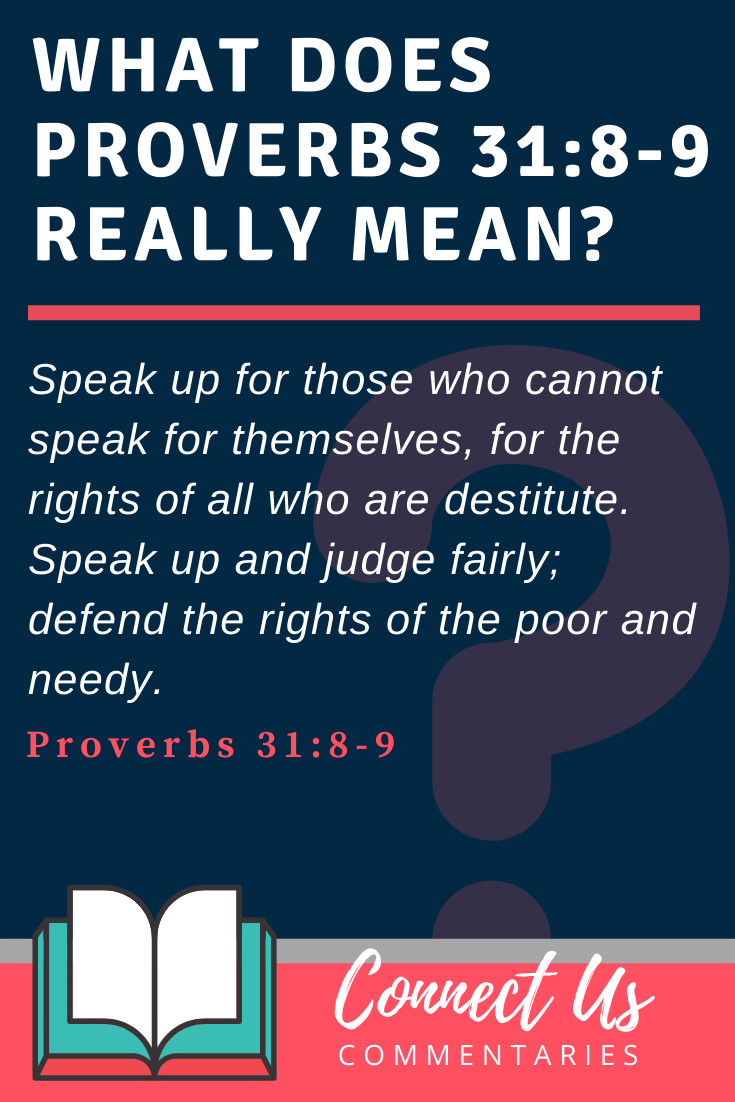