Explanation and Commentary of Romans 9:13

A serious conundrum for those that deny the sovereignty of God in choosing who will be saved, this verse must be approached with great care. Language, especially the English language has its limits, and so every word of the Bible must be compared to every other word before an attempt can be made to know the heart of God on a matter. Paul’s point here is that humanity in its fallen state is unable to choose God without some sort of prevenient grace. He shows that of all the people of the world to pick to bless as his chosen nation, he chose Abraham, to the exclusion of everyone else. This was not because of anything special in Abraham, himself a sinner like the rest of mankind, but because of God’s own good reasons. All have sinned and fall short of the glory of God (Ro 3:23). As such, all deserve the wrath of God for sin. Paul’s point is that God, in his goodness, has set aside some to be objects of his mercy. God chose Isaac because he had chosen Abraham. Of Isaac’s two sons, he sovereignly put his favor on Jacob.

God cared for Esau, as an offspring of Abraham, and he provided for him (Gen 36-37). But nonetheless, Jacob would be the son of the promise. Again, this was not because Jacob was somehow more righteous than Esau, but that God chose to favor him for reasons that are his own, and sanctified by the fact that they are his reasons. Paul’s point here is that God, being the Creator, has the right to do whatever he wishes (Ro 9:21).

The sense in which God “hates” Esau is the sense in which he “hates,” because he must in his holiness, all “sinners” as much as he hates sin. An example is found in Psalm 5:5, “The arrogant cannot stand in your presence. You hate all who do wrong.” And yet, it is absolutely true that “God so loved the world that he gave his only Son, that whosoever…” Whosoever teaches us that anyone who turns to God is a recipient of his love. But the benefit of submitting to the plain truth of Romans 9 is that one can rest in the assurance that God himself “made us alive” (Eph 2:5). If God made us alive, he will not unsave us. This is a blessed truth, and we should praise God for it.

Breaking Down the Key Parts of Romans 9:13

#1 “Just as it is written:”
Paul refers to Malachi 1:2. In Malachi’s prophecy, God’s judgment is pronounced on Edom (Esau) not arbitrarily, but because Edom persecuted the Israelites. God had blessed Esau, but his offspring had turned from God. Paul’s point goes further back to the choosing of Jacob over Esau to receive Isaac’s blessing and Abraham’s heritage, but this also shows the relationship between the sovereign choosing of God and the willful choices of rebellious unbelief.

#2 “‘Jacob I loved, but Esau I hated.’”
For reasons known only to God, Jacob was made the object of the mercy of God. Neither Jacob nor Esau was worthy of this, but God’s choice made him worthy by the future blood of the Lamb slain since the foundation of the world.

NIV
Just as it is written: “Jacob I loved, but Esau I hated.”

NLT
In the words of the Scriptures, “I loved Jacob, but I rejected Esau.”

ESV
As it is written, “Jacob I loved, but Esau I hated.”

KJV
As it is written, “Jacob have I loved, but Esau have I hated.”

NKJV
As it is written, “Jacob I have loved, but Esau I have hated.” 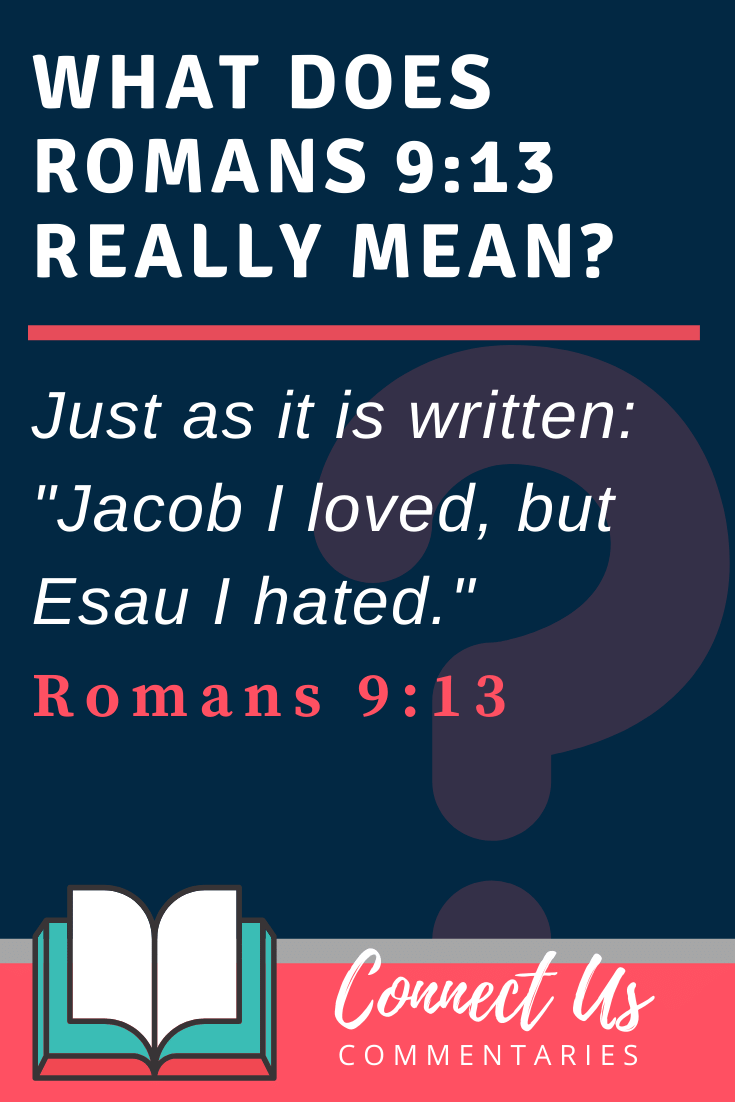